BY hellodrdavis on October 8, 2018 | Comments: one comment
Related : Days of Our Lives, Soap Opera, Spoiler, Television 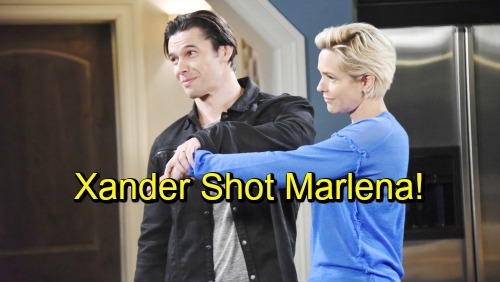 Days of Our Lives (DOOL) spoilers tease that Eric (Greg Vaughn) will get a big surprise when he finds Nicole (Arianne Zucker) in an apartment in Chicago…he’ll find Xander (Paul Telfer), too. Xander has been a thorn in Eric’s side for a long time, and Eric’s going to be stunned to find him with Nicole. And Eric will be even more stunned when Xander lays a couple truths on him.

First off, Xander will proudly reveal to Eric that he is the one who shot Marlena (Deidre Hall) at her wedding to John (Drake Hogestyn). This will come as a total shocker to Eric, who’s not privy to the fact that Marlena has just recently remembered there being a hidden second shooter at the wedding. Then Xander will reveal that Marlena wasn’t his intended target…Eric was.

Next, Xander will let Eric know that he and Nicole are now husband and wife. Of course, Nicole won’t be thrilled about the situation, and she’ll hate it that Eric has to find out this way. As it turns out, the only reason Nicole agreed to marry Xander was because Xander blackmailed her into it. Xander knows that Nicole killed Deimos (Vincent Irizarry) and Xander’s got possession of Nicole’s taped confession that he stole from the Kiriakis safe.

Needless to say, all of this won’t start things out on the right foot between Eric and Xander. In fact, Xander will feel like finishing the job he started at the wedding and killing Eric right there on the spot. But Nicole will intervene and persuade Xander to let Eric go. It seems that Xander will be holding all the cards and there’s not much that Eric can do about it.

But Days spoilers say that Eric will sneak back to the apartment when Xander leaves, and that he will pledge to help Nicole out of her difficult situation. It won’t be easy, though. Xander is quite evil and also very cunning, plus he has the upper hand since he’s got possession of Nicole’s taped confession. But Nicole will have a proposition for Eric. She’ll suggest that they conspire to kill Xander!

Whether or not Eric and Nicole actually follow through on that wild idea remains to be seen, but the two of them will make love after their discussion and enjoy a nice reunion in Xander’s absence. But they’ll have to be careful going forward and find a way to deal with the Xander problem.

Do you think that Eric and Nicole will actually try to kill Xander? Stay tuned to DOOL and don’t forget to check CDL often for the latest Days of Our Lives spoilers, updates, and news.