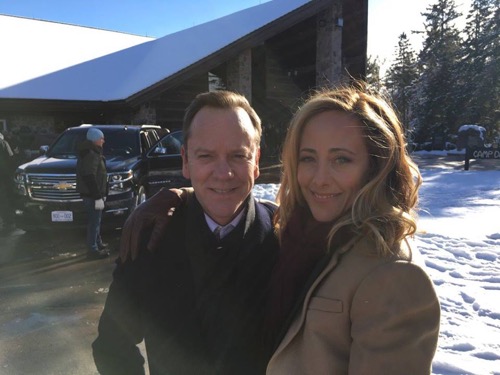 Tonight on ABC their new conspiracy thriller Designated Survivor airs with an all-new Wednesday, March 7, 2017, episode and we have your Designated Survivor recap below. On tonight’s Designated Survivor season 2 episode 12 called “The Final Frontier,” as per the ABC synopsis, “When a missile intended to bring water to stranded astronauts in space is hacked, President Kirkman must work with Russia and enlists the help of Dr. Andrea Frost to help save lives and find out who is behind the hack. Meanwhile, Hannah finds herself working with Damian again.”

Hannah turns around to look at Damian. He tells her he is going to put his gun down so they can talk. She tells him if he does she’s going to kill him. He tells her she won’t, she knocks him out.

The president heads into the office to talk with a group of astronauts who are on a mission in space and out of water soon. He tells them that they are working hard to get a missile to them with water. They should see it in no time.

Aaron and Hannah talk to Damian. He wants to tell them some time-sensitive information. They want to know his questions to the Russians. Aaron tells him to start talking. He shares that he was enlisted to prevent another Cold War years ago and yes, he is indirectly responsible for tipping off the banker and indirectly killing the First Lady. Now he is here to redeem himself. He tells them that their space agency has been hacked.

Tom meets with the Russian ambassador. He wants them to help bring the astronauts home and to do that they need to find the hackers. Damian gives Hannah a lead, a retired hacker who knows those possible to be able to pull this off. Hannah tells Aaron that she thinks he is playing them. Aaron doesn’t care. They need anything they can get.

Tom meets with the ambassador again. He commands he move fast and launch a Russian missile or Tom will expose Damian for the spy he is on TV. Tom gets word that the hackers have turned the temperatures up on the space station. The astronauts are already dehydrated.

Tom’s daughter comes home from school. She got into a fight with another girl in school for the second time. Tom tries to talk to her. She says it won’t happen again but she is tired and wants to go lay down.

Tom meets with Dr. Frost. He hopes her expertise will allow them to save the astronauts. Meanwhile, Damian brings Hannah to meet a hacker who can find their suspect. He gives them a name and then tells Damian they will never speak again.

Hannah and Damian find themselves at a flower show. The hacker is an avid Orchid lover. When Hannah walks up to him with Damian, he freaks and makes a run for it. Damian shoots him outside and takes him down. While laying on the gurney, the hacker tells them it wasn’t him but he did analyze the code.

Dr. Frost helps the team, directing them on how to manually change the space station’s temperature. It works!

Tom tells Emily about his daughter’s troubles. She respectively tells him that he just needs to be there for her while she gets through the loss of her mother.

Hannah and Damian find out who the hacker is from Chuck. He is a plumber. None of it makes sense. They head to his house, but his wife tells them he is dead. They go through his things.

Tom meets with the principle. She tells Tom that Penny is lashing out at students who are bullying others. They just need to channel her response in a positive way.

Tom calls Moss in and asks him why he cut a deal with the Russian Ambassador. Tom is angry, but Moss tells him he had to do it because since Alex died he has been over cautious, indecisive and more. Tom tells him that he is undermining his authority. He dismisses him and his services.

The team meets with Tom to decide how they deal with Moss’ dismissal. After, Tom sits with Penny for dinner. They talk about missing Alex. A video of Tom threatening the man who killed his wife goes viral.