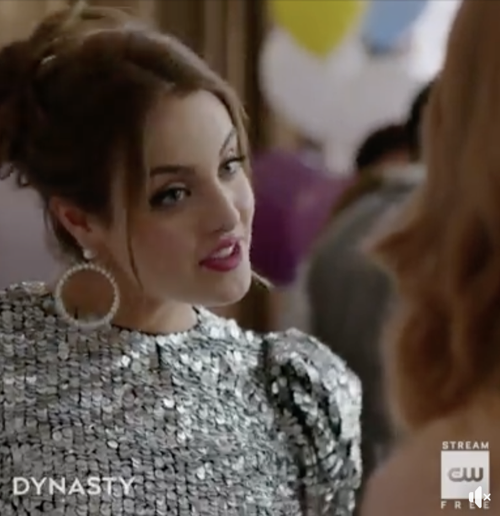 Tonight on the CW Dynasty the reboot of the 1980 series that followed the Carrington family airs with an all new Friday, October 26, 2018, episode and we have your Dynasty recap below.  On tonight’s Dynasty season 2 episode 3 “The Butler Did It,” as per the CW synopsis, “Fallon gets in over her head and needs Liam and Culhane’s help. Kirby makes a shocking discovery that changes everything, while Blake wines and dines a new guest.”

Blake is walking with Cristal and she asks her out to dinner so that they can talk more. Fallon tells Michael that Max proposition her so she had an escort pretend to be her and sleep with him to get the contract, but he died. Now Fallon is afraid that Vance knows something and might blackmail her. Fallon’s plan now is to fly to New York to get the contract and handle the escort. Liam is waiting downstairs for Fallon, he tells her that they found Max naked in his penthouse, they say he had a heart attack. Fallon acts surprised and says she is sorry. All of Liam’s family in New York will be throwing a memorial and Fallon is quick to say that she will go. Liam says he can’t, his mom wasn’t close to her brother, but he was and she is flying to see how he is doing so he needs to stay put. Liam also adds that his mother wants to meet his wife. His mom is going to take over the company now and she is going to have to be the one to sign over the sale unless Max signed the contract before he died. Liam doesn’t think he did, the lawyers couldn’t find anything. Michael tells Fallon that she should stay put and he will go to New York.

Alexis is sitting with Melissa, she asks if she can host the baby shower and says she is sorry for not believing that she was pregnant. Melissa asks if they can now call her granny. Alexis tells her to be careful, they can take away that child if she wants to.

Kirby arrives home calling Fallon’s name and Alexis comes out. Kirby says she is mad that Fallon pressed charges against her. Kirby says that she did not start the fire and she resent Alexis for telling everyone that she was the problem child. Kirby says to Alexis, “I’m back bitch and I’m your problem now.”

Fallon meets Liam’s mother who tells her that Liam neglected to tell them about her before. Then Liam’s step-father, George, comes out to meet her.

Cristal is with Blake, he shows her Crystal’s clothes but she says she feels weird to wear her friends’ clothes.

Liam, Fallon, his mother, and George are playing tennis when his mother hits Liam hard in the back, Fallon is concerned and doesn’t like his mother talks to him. Liam’s mother is impressed with Fallon’s energy and says, as usual, she has to carry Liam’s ass.

Kirby is with her therapist and tries to hypnotize her and pull memories out of her mind. He asks her what she remembers before the Carrington’s accused her of setting the fire.

The therapist, Nick, is with Alexis and tells her that Kirby really doesn’t remember anything, Alexis gets frustrated and asks him what is she paying for. Alexis wants to know exactly what Kirby remembers.

Michael is in New York, he thought he was meeting Vance but a woman named Ava comes out. She tells him that he needs to give her a million dollars and she will give him the contract. Michael tries to ask questions, but she won’t answer them. Michael says he doesn’t want to do business with her and walks out.

Kirby thinks back to the fire and sees Alexis face. She is with Jeff and she tells him sometimes that she did set fire to Fallon’s room. She wonders if she is the monster they say she is.

Cristal is all dress up and with Blake in a plane to go out to dinner.

Sam orders a baby grand piano for Steven who is shocked because they already have one; Sam says not in the nursery. Steven thinks Sam is overcompensating from not supporting him. Sam says that he is not ready to be a father and he knows that he doesn’t the baby either. Fallon calls Michael and tells him to please tell her that he got the contract. Michael says no and these are not people that they want to do business with. Fallon tells him to pay off the escort and get his butt home.

Sam is going a little over the top on the baby shower, Joseph convinces him that this should be more about Steven. He shows Sam a photo from Steven’s baby shower,

Liam and Fallon are in bed, in his mom’s house and they build a barrier out of pillows between them. They share stories about their childhood. Liam reveals that his mom had a mental breakdown. Fallon turns over and says goodnight.

Kirby is back with the therapist, he tries to get her to relax and let go. Kirby thinks back to the fire, she sees herself being taken away in a car after the fire but comes back to the present. Kirby tries again, she sees Alexis and Joseph arguing, herself hiding and Alexis finding her. Fallon leaves the session.

At breakfast the next morning, Liam’s mother tells Fallon that she noticed all her calls to Michael. Fallon calls his mom a Joan Crawford shrew and tells her she has no clue what she is missing in Liam.

Kirby goes to Joseph and tells him that she remembers that he was having an affair with Alexis. She says that she paid the price for what he did, his affair is the reason she was sent away and choose to believe people when she did nothing.

Michael meets Ava again and asks her how much money she wants. Ava has photos of the escort and says she offered double what he offered. Ava doesn’t want money, she wants Michael to be her new consultant in Atalanta and if he says no, she releases the photos.

Time for the baby shower, it is really over the top. Melissa and Alexis share snarky comments when Joseph walks up and asks for a word with Alexis.

Steven apologizes to Blake, then asks him what if he was a bad father. Blake says after they lost Adam he didn’t know if he would be a good father, until the day Steven was born. The two hug and Sam walks up with another gift. Steven says he should have appreciated everything that Sam did. Sam says he is scared but he still wants to go on the journey with him.

Alexis is with Joseph and tells him that she refuses to talk to him now because she has Melissa’s thunder to steal. Joseph tells her off, Kirby was twelve and she had no right to send away after she was the one who set fire to Fallon’s room. Joseph asks her if he is the father, she says yes, congratulations. There is a camera in the room, Kirby is watching everything.

Michael shows up at the party and gives Fallon the contract, she asks what happened to Vance’s crazy people, he says their bark was worse than their bite. Fallon asks Liam to stay on for the transition team, he says he will see her at the office.

Kirby goes to see Fallon who asks her how therapy is going. Kirby says that is not the way to talk to her sister. Fallon asks Steven why Kirby would call her her sister.

Cristal is there, she sees Sam and tells him she is leaving. Blake walks up and tells her he is glad that she is there. Cristal hands him some jewelry she is wearing, she says she wants to return it.

Steven calls a toast and thanks Sam for the spectacular event. Time for the gender reveal which is shown a huge screen and all of a sudden we see the conversation between Alexis and Joseph but Alexis stops it. Kirby gets up and tells everyone that Joseph and Alexis had an affair, Alexis says that she is delusional and she will make sure that she gets the best help. Joseph says that Kirby is right, there was an affair, but Fallon is not his child, Steven is. Blake walks away. Melissa says that she can’t do this anymore if her child is not the Carrington air, then she reveals that Mike is the father and not him.