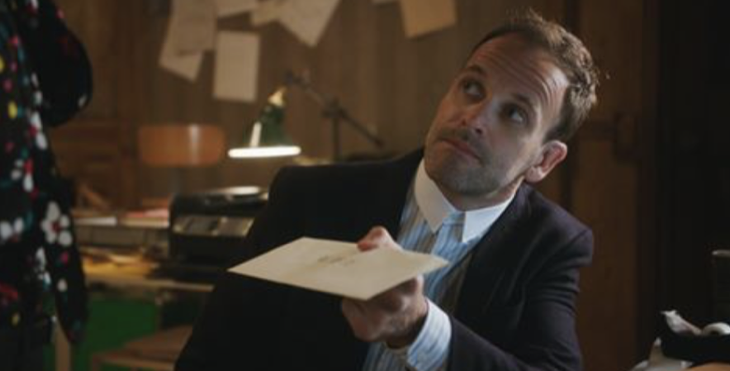 Tonight the CBS series Elementary airs with an all-new Sunday, May 7, 2018, season 6 episode 2 and we have your Elementary recap below. On tonight’s episode called, “Once You’ve Ruled Out God” as per the CBS synopsis, “Watson and her half-sister, Lin, have conflicting reactions when their estranged biological father dies. Also, Holmes and Watson find themselves on the hunt for a stolen plutonium shipment they fear will be used to make a dirty bomb after a department of energy inspector is killed.”

Watson attends the funeral of her father. Watson talks to her step-sister. They talk about meeting up later in the week.

A man is walking down the city street. He is on the cell phone. He is electrocuted and falls to the ground. Holmes arrives on the scene. He tells the authorities that the man was murdered by man-made electricity. There is no way he was struck by lightning with skyscrapers all around.

Watson, Holmes, and Gregson look at the body in the lab. His name is Rohan. He works for a power plant. His wife is a physicist. They have a history of domestic disputes. They call the wife down to the precinct. She admits she has been cheating on her husband. She has an alibi. She was with her boyfriend. Besides she wouldn’t know how to make technology like that. There are labs in New York that do know. She gives them some names.

Watson meets her step-sister who has a letter from her father for her. Watson is surprised.

Marcus and Holmes head to their first company where they learn Rohan was working on a cannon that emits lightning. The cannon, named Sparky, is now in a truck and is ready to be brought to a lab. Holmes notices that the van was driven the night before when Rohan was killed. The cannon’s log has also been deleted. They track down their first suspect. He admits to taking the van out and wanting to hit not kill Rohan. He has secured plutonium from Japan on a business trip and needed to but time after it was stolen.

Gregson brings in an outside agency to help find the plutonium that can be used to make a dirty bomb. In the middle of the meeting with the agent, Holmes gets up and leaves. Watson talks to him outside. The lights were hurting his eyes.

At home, Watson looks over road footage while Holmes rests on the couch. They talk about the letter her dad wrote her. She threw it out. The last letter he wrote her made no sense. She spots a van that is suspicious.  The next day they find the van. It has gravel in the tires. They research gravel roads close by given the mileage of the van. There is an ex-con in the area who has a history of making bombs.

Marcus discovers that the ex-con was part of a gang named PAIN in prison. A man named Colm is the leader of the gang and he is out of prison now. But no-one has seen him. Holmes discovers he has a hobby collecting war figurines. They need to call several hobby shops.

Holmes hands the letter Watson threw out from her father. She needs to read out. Holmes can tell that he spent a lot of time writing it.

They track down Colm. They bring him in. He laughs at them. He isn’t a racist. He only posed as one in jail to get the guards on their side. He did catch wind that some Europeans in expensive suits were shopping for a dirty bomb.  Gregson comes to tell them that 911 received a call from a woman who overheard a group of men talking about blowing up a mosque. The police arrive on the scene. Holes get to thinking. They don’t have a dirty bomb judging by the camera footage that has been sent in – they are trying to pull off a heist.

Gregson and his men arrive to find the European men dressed as cops with bags of diamonds. Back at the station, Holmes explains to the outside agent that the dirty bomb and missing plutonium was all a distraction for a diamond heist and the agent himself is part of it. He is dating the sister of one of the jewel thieves. They arrest him.