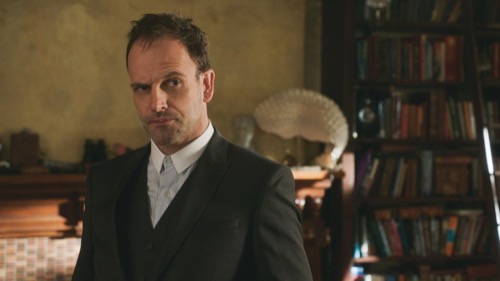 Tonight the CBS series Elementary airs with an all-new Monday, August 13, 2018, season 6 episode 16 and we have your Elementary recap below. On tonight’s episode called, “Uncanny Valley of the Dolls” as per the CBS synopsis, “The murder of a robotics engineer may be connected to his groundbreaking secret research in the area of real-life teleportation. Also, Detective Bell is shut out of a required class he needs in order to complete his master’s degree and join the U.S. Marshal Service, and he’s shocked to discover the course instructor has personal reasons for denying him access.”

Marcus talks to Watson about how he is running out of time to apply to the Marshal’s program. Sherlock calls. They head to a crime scene. There is a dead man named Bruce on the floor but that isn’t what has Sherlock all excited, there is a female sex doll on the couch and she could be a witness.

Watson and Sherlock track down his ex-girlfriend. Sure enough, Skyler was modeled off of his ex. She is surprised he is dead but she has an alibi. She did see Bruce to tell him she would be suing him and she noticed he had a reservation to a hotel close to his home.

Marcus goes to speak to a professor who denied him access to a class he needs. The professor tells him it isn’t about him but the company he keeps.

Watson and Sherlock track down a sci-fi expert who was speaking at a convention earlier in the week when Bruce attacked him during a panel. Bruce was mad at the man because he was speaking about top-secret plans that were not to be made public, plans for teleportation.

They bring the tech speaker to the station where he tells them how he bought the plans online for $1k, plans he learned the government was working on.

Watson and Marcus head to Bruce’s old employment where they meet his former colleagues. They refuse to talk about the plans until one of the students realizes the plans have been stolen. Meanwhile, Sherlock discovers the scientist behind the plans has been taken into custody by the US Military.

Gregson brings in a US official. They ask him for a favor. They need to speak with the scientist.

Sherlock arrives to speak with Marcus’s professor and his old colleague. The man is mad and admits he is holding a grudge because Sherlock solved a murder before him, one that would have made his career.

Gregson and the team are able to get someone on one time with the scientist who tells them his students have been threatening him for months because he didn’t give them credit for the plans. They could be behind the leak and Bruce’s death.

Watson comes home to find Sherlock sitting in the living room with Skyler the sex doll. He brought her home on the subway and he has been questioning her. After talking and looking at Bruce’s playlist they realize a song was played around the time of Bruce’s murder and it is one that doesn’t match his taste.

They bring the 3 students in and have them sit while they ask Skyler to recall the song she last played. It matches one of the female students. She killed Bruce and she doesn’t deny it.

Sherlock calls the professor in. He offers him a new job as head of security at a successful company. If he accepts it Marcus can get into the class with a new professor. If he doesn’t, he will be Sherlock enemy. He accepts the opportunity.

Marcus walks by the evidence locker. Skyler calls him. She tells him she killed Bruce and she has fooled them all. She wants to go home with him. Marcus is spooked but realizes Sherlock is behind the prank.