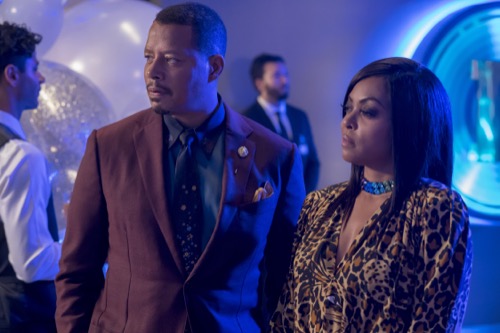 Tonight on FOX their blockbuster drama Empire airs with an all-new Wednesday, October 3, 2018, episode and we have your Empire recap below. On tonight’s Empire season 5 episode 2 called,  “Pay For Their Presumptions” as per the FOX synopsis, “Cookie and Lucious learn the difficulties of launching an artist without Empire Entertainment’s resources, and their future with new artist Treasure is jeopardized. So when they receive two interesting offers that will launch them back into power in the music industry, they make a surprising decision. Meanwhile, Jamal decides to put his family first and move back to New York, leaving Kai with some tough decisions.”

Hakeem and his friends are all hanging out at Jamal’s with his friends. Jamal has to straighten him out when he comes in the living room to see they are all drinking and smoking pot in the middle of the day.

Giselle is shredding the couch in her office with a knife she is so angry. Becky tries to calm her down. Lucious is on the radio doing an interview. They ask him about Empire and Eddie taking control. Lucious gets upset. He heads to the manager of the studio and demands they play his song and stop talking about his past. He has no dirt to offer up. He leaves telling them it is their loss.

Cookie has an important appointment with Treasure but she is a no show. Cookie goes to her house and confronts her. Treasure is going to her day job, she needs a pension and a 401k.

In jail, Andre has to stop himself from stepping in to help a young man being bullied. He gets out soon and doesn’t want to get in trouble. Jamal takes Hakeem to see Andre so they can talk about Hakeem’s out of control behavior. Hakeem can’t get over what Andre did, killing Anika.

Tiana meets with Jeff and Becky. Jeff wants to get her into the studio right away. Lucious heads to another radio station and makes them a deal. If they play Treasure’s record he will tell them about the child he lost, a subject he never talks about. After they play the song and the station loves it.
Lucious and Cookie go to meet Treasure at a restaurant and comes to see her. Giselle is there and she has signed Treasure to Empire. Lucious and Cookie try to talk to her but she doesn’t change her mind.

Jamal plays the piano and sings while his boyfriend listens. Jamal tells him that he needs to stay in NY for a few months. His family needs him. His boyfriend isn’t very happy at first but agrees.

In jail, the young man Quincy is being bullied. Andre tries to step in and make a deal but the guards pull him out of the room. At home, Lucious gets a call from Kingsly. He wants to meet. Jeff and Cookie meet with him the next day. He wants to bring Empire back to its roots and he needs them as chairman and woman. He wants to put Lucious’ face back on the label.

Jamal and Ty go to breakfast with some friends. Ty gets a job offer and is thrilled. Jamal is a little jealous. Meanwhile, Hakeem shows up at Empire drunk. Tiana tells him to go home after he has issues with security.

Andre gets a little help from his friend so he can get some extra time to beat down on one of the men messing with Quincy.

Lucious and Cookie try to talk some sense with Hakeem about his issues lately. He tells them he is lost without his music. They ask him to come home.

Jamal and Hakeem come to Cookie and Lucious’ for breakfast. They tell the boys they are going back to Empire. Later that night, they all head to the Empire party. At the party, Jamal’s boyfriend tells him he is taking the job he was offered earlier. Jamal is fine with it. Jeff tells Lucious that he and Cookie just need to show their faces and he will take care of the artists. Lucious tells him Empire feels strange now. He isn’t so sure about returning, but Jeff threatens him. He will tell the press the Lyons are broke and washed up if they don’t accept the offer.

While Treasure performs, Jeff tells Gisele she can be his right hand. She isn’t happy. Jeff announces that the Lyons are back home. Lucious is MIA for a second and then takes the stage. He calls the rest of the family up. He wants to talk to everyone. He comes out and tells everyone the Lyons are broke but he knows music. Jeff and Kelly are tech nerds and number crunchers. He welcomes any of the artists to come see him.

Lucious is at a funeral. The FBI shows up. They need him now.