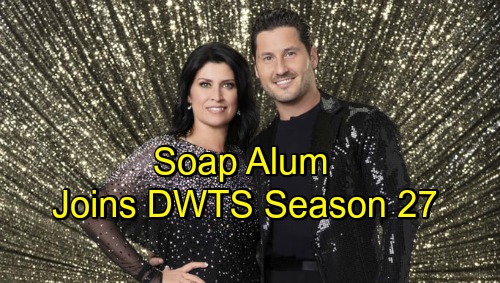 Dancing With the Stars has just revealed their line-up for season 27, so DWTS fans are already buzzing about the new competitors. This year’s cast features some big names, including one from the soap world. Nancy McKeon is best known for her role as Jo Polniaczek on The Facts of Life, but daytime drama lovers certainly remember her well. She’s actually an alum of two popular soaps.

McKeon had roles on The Secret Storm and Another World, so that should add even more fans once the competition kicks off. Of course, McKeon can’t score the mirror ball trophy alone! According to TV Line, she’ll be strutting her stuff with Val Chmerkovskiy. DWTS viewers will recall that he won with Rumer Willis in season 20. Chmerkovskiy also came out on top with Laurie Henandez in season 23.

McKeon’s got a solid partner and plenty of support behind her. However, she’s not the only fantastic contestant who’s ready to hit the dance floor. Other Dancing With the Stars competitors include Bobby Bones, DelMarcus Ware, John Schneider, Juan Pablo DiPace, Milo Mahheim, Alexis Ren, Danelle Umstead, Mary Lou Retton and Tinashe.

If you’re wondering when you can check out McKeon and the other dancers, you’re in luck. We’ve got season premiere airdate to pass along. You can tune in at 8:00 p.m. ET on Monday, September 24. That’ll mark the official start to DWTS season 27 on ABC. Dancing With the Stars fans are already excited to see what’s in store and find some favorites to root for.

Will you be watching Nancy McKeon and her fellow dancers this year? Does McKeon stand a good chance of winning with Val Chmerkovskiy as her partner? Do you have another early pick to win? We’ll give you updates as other news comes in. Don’t forget to check CDL often for the latest spoilers, updates, and news.