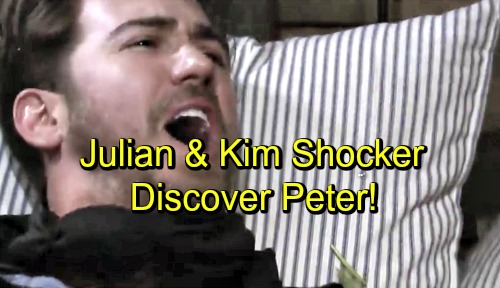 General Hospital (GH) spoilers tease Julian Jerome (William DeVry) and Kim Nero (Tamara Braun) are headed on a camping trip, but their little adventure could lead to some big discoveries. This is all Kim’s idea, so the whole thing seems like a plot point. Why else would Kim suddenly want to go camping with Julian? There must be a reason their getaway destination is the secluded wilderness and not a hotel.

Perhaps Julian and Kim’s General Hospital storyline will soon collide with another one. We know Peter August (Wes Ramsey) is trapped at a cabin in a wooded area. He’s tried to call for help a few times, but Liesl Obrecht (Kathleen Gati) always insists that no one will hear him. She’s certain that they’re all alone, but that may not be true for long!

Kim and Julian plan to pitch a tent, so they could easily set it up near the cabin. Will they hear Peter’s screams during their trip? Dr. O’s been torturing Peter, so he cries out often. Even if Peter’s given up on trying to yell for assistance, his agony could make enough noise to attract attention.

If they hear quite a commotion, Julian and Kim might rush over to investigate. Even Liesl the tormentor has to take breaks! She may leave Peter unattended and give the campers an opportunity to rush in. Peter would have a real shot at being rescued without his captor hovering over him.

Of course, trouble could be brewing if Liesl catches the potential rescuers and turns them away. She may prevent their shocking find – at least for a while. Julian and Kim could always put everything together later when new clues surface.

However, we should definitely consider the possibility of Peter’s immediate freedom. He’s injured thanks to the glass shard and Obrecht’s bat. If Kim spots him, she’ll want to get Peter to GH. Unlike Liesl and many other Port Charles residents, Kim would view Peter as a patient and not just a menace. She’d undoubtedly call 911 and get Peter some medical attention as soon as possible.