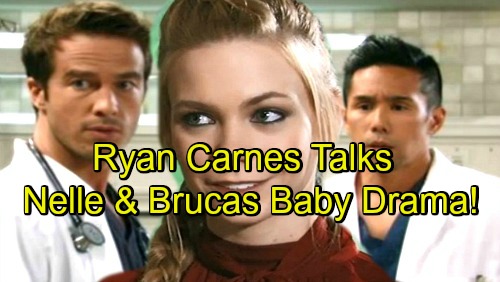 General Hospital (GH) spoilers reveal that some “Brucas” baby drama is about to hit Port Charles. During a recent Twitter chat, Ryan Carnes (Lucas) dished on what’s ahead for his character. He offered some fun clues about Lucas and Brad’s (Parry Shen) storyline, so let’s discuss the looming mayhem.

First, one fan asked about Carnes’ airtime. She was hoping he’d stick around longer than usual. Lucas and Brad tend to just pop up occasionally, but many viewers would like to see more of them. Carnes suggested that General Hospital watchers would be pleased soon. “There’s definitely reason to tune in,” Carnes said. “I’ll just leave it at that.”

Carnes also answered a question that’s on plenty of fans’ minds. It’s a biggie! Will he be shirtless soon?! If you’re rooting for that, you’re in luck. Carnes indicated that he’d “DEFINITELY” be showing off his abs. Just be patient and you can catch Carnes’ hot muscles.

As for Lucas and Brad’s main plot, Carnes had some interesting teasers. “We are definitely exploring some life issues coming up,” Carnes said. General Hospital has already had Lucas express fear about the adoption. The anonymous birth mom could still change her mind and now Julian (William deVry) is about to stir up trouble. Lucas and Brad will certainly face some struggles in the coming weeks.

Another fan wanted to know about Nelle (Chloe Laner) and how she might tie in. Does Nelle have some twisted scheme in play? Is her baby the one intended for Brad and Lucas? Carnes was a bit stumped on that topic. “I have no idea,” Carnes admitted. However, he did indicate that Lucas is wary of Brad and Nelle’s bond. Carnes said, “Can’t trust her any farther than…”

When asked if Lucas would play a role in Nelle’s downfall, Carnes didn’t seem to think it’d be necessary. “She might not need any help with that…might be able to handle it all on her own,” Carnes hinted. Nevertheless, he suggested Lucas may get involved in the Ferncliff chaos with Carly (Laura Wright). “I think you’ll be surprised with what happens related to that,” Carnes said.

Finally, people wanted the scoop on the baby’s gender. Someone asked if Lucas might want a boy or a girl, but Carnes doesn’t think it matters. Lucas “only cares about being a great father,” so let’s hope GH gives him the chance!