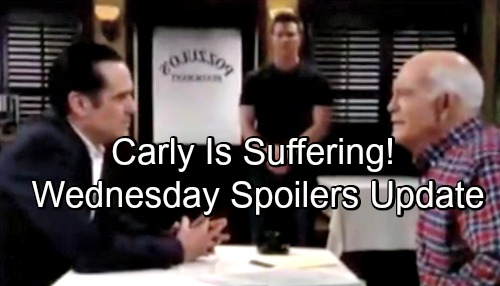 General Hospital (GH) spoilers update for Wednesday, June 13, tease that Carly (Laura Wright) will feel all alone at Ferncliff. She’ll settle in for a long stint of suffering, but she’ll try to keep hope alive. It may take Jason (Steve Burton) a while to get her out of there, but he’s definitely working on it.

In the meantime, Carly will hear a list of rules. A nurse will spell out what’s expected from each Ferncliff patient. She’ll encourage Carly to take full advantage of group activities and get to know everyone. However, Carly will mainly focus on her future. She’ll make it clear that she’s going to prove she’s sane and score her freedom ASAP.

At Pozzulo’s, Mike (Max Gail) will get updates on Carly’s dilemma and offer a suggestion. The idea will actually make sense to Sonny (Maurice Benard). He’ll think he can use this as a springboard for his new plan. General Hospital spoilers say Sonny will do whatever it takes to get Carly home where she belongs.

Across town, Alexis (Nancy Lee Grahn) will prep Kiki (Haley Erin) for the next phase of her case. This civil suit will come with some drama, so Alexis will want to be sure Kiki’s ready. GH spoilers state that Kiki will provide reassurance. She’ll believe she can tackle this challenge, especially since she’s got such a great team. Alexis is an excellent lawyer and Liz (Rebecca Herbst) is giving Kiki plenty of support, too.

Over with Franco (Roger Howarth), he’ll offer a different kind of support. After he learns the dirty Dr. Bensch (James DePaiva) details, Franco will resort to violence. He’ll corner Dr. Bensch by the lockers and slam him against a few of them. Franco will insist that Kiki is like a daughter to him. He’ll probably contend that if Dr. Bensch ever bothers her again, he’ll regret it.

Elsewhere, Griffin (Matt Cohen) will have some explaining to do. After Ava (Maura West) discovers the sexual harassment news, she’ll assume this is the reason Kiki and Griffin are so chummy. Ava will guess that Griffin kept her in the dark, but he’ll undoubtedly protest. He wasn’t aware that Dr. Bensch had taken things that far.

It sounds like another argument’s on the way, but at least this will distract Ava from the real issue. Griffin had sex with her daughter, so that’s about as bad as it gets for their relationship. General Hospital spoilers say Griffin will keep a lid on the secret for now, but it’s destined to blow eventually.

Valentin (James Patrick Stuart) will also get grilled on Wednesday’s new GH episode, June 13. Once Alexis catches up with him, she’ll have several questions. She’ll most likely want the scoop on the watch from the envelope. Nina (Michelle Stafford) will face a bit of an interrogation as well. She’ll squirm as Sam (Kelly Monaco) and Curtis (Donnell Turner) seek answers about Peter (Wes Ramsey).

Nina will tell some fibs and get out of there as quick as she can. Will Curtis and Sam realize she’s hiding something? Liesl’s (Kathleen Gati) counting on Nina to keep her mouth shut, but her strange behavior could tip them off. We’ll keep you posted as other GH info emerges. Stick with the ABC soap and don’t forget to check CDL often for the latest General Hospital spoilers, updates and news.