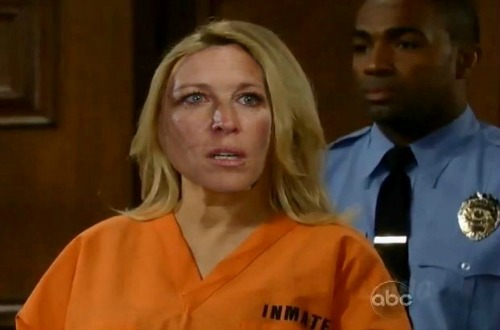 General Hospital (GH) spoilers tease that Carly Corinthos (Laura Wright) may face danger in Ferncliff. Several Port Charles residents have spent time there over the years, including Lucy Coe (Lynn Herring), Heather Webber (Robin Mattson) and even Carly herself. In 2012, things took a perilous turn when Robin Scorpio (Kimberly McCullough) was held in Ferncliff against her will.

Robin was subjected to electroshock therapy and other unnecessary psychiatric treatments by Dr. Ewen Keenan (Nathin Butler). He was later revealed to be working for Jerry Jacks (Sebastian Roche), but Cesar Faison (Anders Hove) was the one truly in charge. Liesl Obrecht (Kathleen Gati) was also involved in this exciting GH storyline. She eventually transferred Robin to the clinic in Switzerland.

Dr. Keenan and Faison are dead, so they can’t stir up trouble for Carly. Liesl is busy with Peter August (Wes Ramsey), which means she’s out as well. However, there’s one person who could still wreak havoc. We’re talking about Ferncliff’s Nurse Fletcher (Mary-Pat Green)!

Why would Nurse Fletcher be a threat Carly without an evil doctor’s orders? For one thing, Carly’s known for having quite a temper. She has a history of blasting the wrong person at the wrong time. During her new Ferncliff stint, Carly will make it clear that this is the last place she wants to be. She’s bound to have an attitude in there.

Nurse Fletcher was fine with making Robin suffer through brutal treatments. Imagine what she might do to a rowdy patient like Carly. No one will be surprised if Carly ends up tranquilized and strapped in a straitjacket. Nurse Fletcher may lock Carly in a rubber room and maintain her ruthless reputation.

At the time of Robin’s imprisonment, General Hospital spoilers suggested that Nurse Fletcher and the rest of the staff were paid off to cooperate. It sounds like the Ferncliff employees really had no scruples. They were willing to endanger patients for money back then, so they’re just as likely to now.

Will Nelle Benson (Chloe Lanier) come up with the cash to make it happen? Will she pay off the staff or at least money-hungry Nurse Fletcher? Nelle would love to see Carly stay at Ferncliff indefinitely, so she might work on a plan to boost her chances. Carly may soon be tied up and dumped in a padded cell!