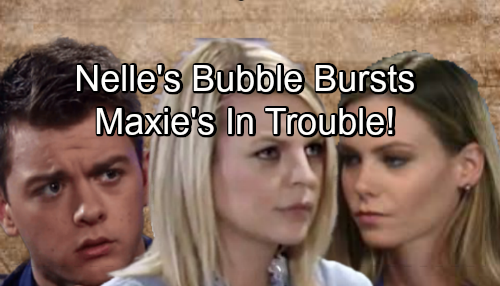 General Hospital (GH) spoilers say Nelle’s (Chloe Lanier) past will explode in more ways than one. Her history with Chase (Josh Swickard) is already starting to come out. However, GH could tie in Nelle’s mental breakdown as well. Everything could come together for a startling storyline down the road.

Let’s consider a few important clues. Chase is suddenly getting closer to Maxie (Kirsten Storms) and the timing is awfully suspicious. He showed his support for Maxie right before he confronted Nelle. These stories aren’t really connected yet, but GH could be setting them up to collide later.

General Hospital spoilers say Chase could play a big role in thwarting Nelle’s plan. Of course, there are several other enemies working against Nelle. Jason (Steve Burton), Michael (Chad Duell), Spinelli (Bradford Anderson) and Sonny (Maurice Benard) are targeting her, too. When you add Chase to the mix, there’s a whole army ready to take Nelle down.

Naturally, Carly (Laura Wright) could also pose a threat when she gets out of Ferncliff. If she can prove she’s mentally stable, Carly may score her release and focus on destroying Nelle. Jason offers another hint in Tuesday’s episode. He insists that Nelle’s the one who needs to be at Ferncliff, so that could be a clue that she’ll end up there.

Nelle previously spent time in a psychiatric hospital, so she’s prone to mental issues. Her schemes are inching her closer to the edge of insanity. What normal person would come up with all these crazy plots? Nelle’s clearly off her rocker on some level, so General Hospital may take full advantage of that.

That brings us to Maxie. Nelle already hates her guts and her new link to Chase will only make matters worse. What happens when Nelle’s bubble bursts? She may learn that Michael’s been playing her. If Nelle learns there’s growing evidence, she may want to get out of Port Charles ASAP.

On top of that, there’s bound to be some twist that affects this baby. If the child’s stillborn or at least struggles to survive, Nelle could realize her dreams are crumbling. Will she snap, kidnap Maxie’s baby and try to skip town? It’d be a great way to let Nelle and Maxie’s stories cross paths. In Nelle’s unraveling mind, she might even believe it was her kid.

This could definitely help the case against Nelle and lead to that Ferncliff stint Jason’s wishing for. Will Nelle completely lose it and find herself in a rubber room? General Hospital will have to wrap all this up with some shocker. That seems like a good strategy.

As a bonus, Chase could return James to Maxie and earn her gratitude. That’d be the perfect setup for their potential romance! We’ll give you updates as other GH news comes in. Stay tuned to the ABC soap and don’t forget to check CDL often for the latest General Hospital spoilers, updates and news.