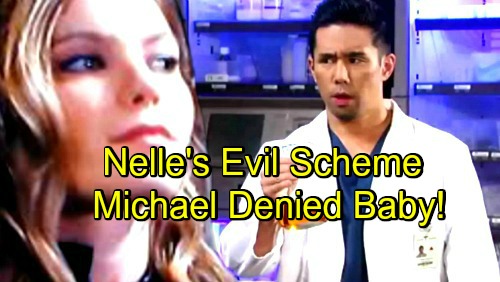 General Hospital (GH) spoilers tease that Michael (Chad Duell) will get a taste of sweet victory, but a crushing loss could soon follow. GH fans know Michael’s setting Nelle (Chloe Lanier) up for a big fall. It’s only fair since Nelle did the same thing to Carly (Laura Wright). However, Michael has no idea what’s in store. He’s digging deep into Nelle’s past for secrets, but she may be keeping one right under his nose.

Nelle’s due date is drawing near, so the baby’s been a hot topic lately. On the stand, Michael (Chad Duell) admitted there’s nothing more important than his child. He assured Margaux (Elizabeth Hendrickson) that he’s going to give this kid a safe and happy home.

Michael is secretly working to clear Carly’s name, but there’s another side to it. He also wants to have a firm grip on his son or daughter. Michael’s starting to see the risks of letting Nelle near this baby. She could become the world’s worst mom!

Nelle just doesn’t seem cut out for motherhood. She may be too self-centered and manipulative to care for this child properly. Michael might hope he can get the goods on Nelle, free Carly and score custody in the end. He probably has his goals all mapped out, but General Hospital spoilers say a bombshell could change everything.

Something just doesn’t feel right about all this. For starters, GH may not want Nelle’s shadow to hang over Michael’s firstborn. Is this really his path to fatherhood? Michael’s a good man who deserves to have a baby with someone he loves. Whether Nelle lives or dies, the kid will be haunted by the horror. The Corinthos clan will always have to remember how he or she came into this world.

Plus, Nelle’s friendship with Brad (Parry Shen) is awfully suspicious. General Hospital fans know his track record. It’s possible Brad tampered with the paternity test as a favor to Nelle. She might’ve done him a favor in return.

There’s even a chance Nelle’s the anonymous birth mom. She may have cooked up some elaborate plot that will leave her baby in Brad and Lucas’ (Ryan Carnes) hands. Brad seems to be in the dark if that’s the case, so maybe this will be a real bomb for him as well.

Regardless, Michael may not end up with this child. Nelle might’ve gotten pregnant by someone else or she might’ve turned to a sperm donor. Either way, Michael could face total heartbreak. Despite all the “baby mama” drama, he’s genuinely looking forward to being a dad. Michael’s sure to be furious when the rest of Nelle’s lies are exposed.

It sounds like more devastation’s ahead for Michael. A paternity shocker could send him down a dark road! We’ll give you updates as other GH news comes in. Stay tuned to the ABC soap and don’t forget to check CDL often for the latest General Hospital spoilers, updates and news.