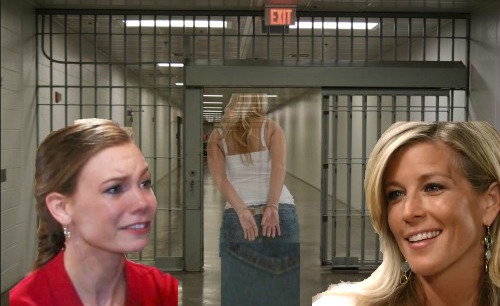 General Hospital (GH) spoilers tease that Carly’s (Laura Wright) roller coaster of emotions will continue. She’ll manage to avoid going back to Pentonville, but she’ll still have to endure a stint at Ferncliff. Carly won’t be thrilled about heading to a mental institution, but she’ll do her best to push through this. Still, Carly should wrestle with plenty of disturbing curveballs in there!

On the bright side, there’s one thing that should give Carly strength while she’s locked up. It’s the thought of getting revenge on Nelle (Chloe Lanier)! In an interview with TV Insider, Laura Wright offered her view of the situation and predicted Nelle’s eventual fate. She definitely thinks Nelle’s got a good dose of payback headed her way.

Wright suggested that Carly will suffer for a while, but Nelle can’t avoid the consequences forever. She teased, “…in the end, I suspect, Nelle will get hers. Carly will come out on top and bring this person down. Bide your time! It’s coming!” Many GH fans are convinced of that as well. That’s just how things balance out in the soap world. Schemers tend to pay the price when their plots blow up.

If anyone deserves to go down, it’s Nelle. She’s brought nothing but chaos to the Corinthos clan. There’s drama lurking around every corner with Nelle in the picture. Michael (Chad Duell), Jason (Steve Burton) and Sonny (Maurice Benard) would all love to see Nelle’s life destroyed. Josslyn (Eden McCoy) should join the Nelle hate club once her “friend’s” deception is exposed.

Wright’s prediction seems destined to come true. It turns out she’s got a pretty good track record when it comes to guessing Nelle’s storylines! Wright admitted that her joke turned into genuine General Hospital spoilers. She stated, “I jokingly said [in character] on set when we’d have scenes together, ‘Somebody needs to push [Nelle’s] ass down a flight of stairs.’”

Later, Nelle indeed took a staircase tumble. That got a big laugh from Wright after she read the script. Wright exclaimed, “And they ended up writing it, which was so funny!” General Hospital spoilers state that both Carly and Nelle have a few tricks up their sleeves. Some shockers and shakeups are brewing, so don’t miss all the action.

Are you looking forward to Nelle’s downfall? Will Carly seek vengeance hereslf or will her loyal loved ones do it for her? We’ll give you updates as other GH news comes in. Stay tuned to the ABC soap and don’t forget to check CDL often for the latest General Hospital spoilers, updates and news.