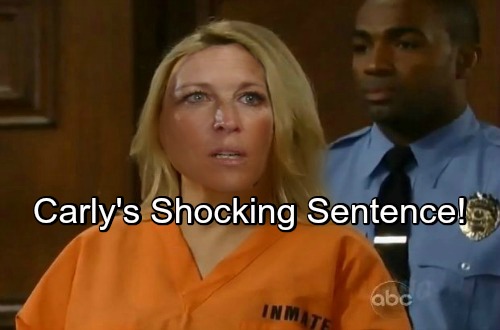 General Hospital (GH) spoilers tease that Carly’s (Laura Wright) victory will feel like defeat. After her trial concludes, the judge will deliberate briefly. Diane (Carolyn Hennesy) must’ve made a pretty convincing case. It won’t take long at all for the judge to call everyone back in. He’ll agree that Carly’s mentally unstable, so that’ll bring good news and bad news.

Carly won’t be going to prison for 25 years, which is obviously the bright side of all this. However, she’ll still have to be institutionalized for a while. Carly will hate that she’s in this predicament because of Nelle (Chloe), but she’ll just try to get through it. General Hospital spoilers say Carly will suck it up and prepare to check in Shadybrook. She’ll expect to relax in there and eventually prove she’s sane.

Unfortunately, Margaux (Elizabeth Hendrickson) isn’t done yet. She won’t be able to score a guilty verdict, but she’ll at least want to make Carly suffer. Margaux will argue that Carly needs more than Shadybrook’s low-level security. She’ll contend that Carly could’ve killed Nelle and her unborn child. Margaux will feel like that should warrant a stay somewhere with stricter guidelines.

The judge will ultimately take Margaux’s advice, so Carly will be sent to Ferncliff. GH fans know this definitely isn’t the ideal situation. Ferncliff is a state facility is for the criminally insane, so Carly will be locked up with lots of nutty, menacing characters. There’ll be plenty of threats waiting for her when she arrives.

In fact, General Hospital spoilers say Carly will clash with one patient right off the bat. She’ll fear the worst once she makes a new enemy. Carly will hope she can survive the chaos in store, but it’s not going to be easy. She could be in grave danger if her loved ones can’t come through for her.

Thankfully, Carly’s got several people in her corner. Michael (Chad Duell), Spinelli (Bradford Anderson), Sonny (Maurice Benard), Diane and Jason (Steve Burton) will all work toward freeing Carly from her nightmare. They’ll go about it in different ways, but they all have the same goal in mind. The plan is to bring Nelle down and get Carly back home where she belongs.

Of course, Jason will fight harder than anyone. He knows Carly needs him, so he’ll do whatever it takes to bring her back alive! General Hospital spoilers say this hot plot’s about to get even hotter, so stay tuned. We’ll give you updates as other GH details emerge. Stick with the ABC soap and don’t forget to check CDL often for the latest General Hospital spoilers, updates and news.