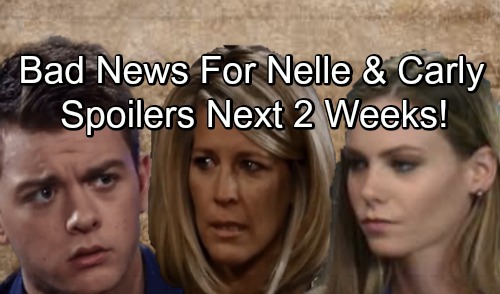 General Hospital (GH) spoilers for the next two weeks tease that some heated showdowns are brewing. The week of June 11-15 will bring several of them. First, Nina (Michelle Stafford) and Liesl (Kathleen Gati) will clash. When Liesl continues to inflict pain on Peter (Wes Ramsey), Nina will try to put a stop to it. She can’t babysit Dr. O every second, so she’ll remain worried when she leaves.

Later, Valentin (James Patrick Stuart) will refuse to deal with a situation. This probably involves Nina’s decision to file for divorce. When Valentin fights for his marriage, it should cause plenty of drama. Nina wants to be rid of him, but Valentin won’t be ready to throw in the towel just yet.

Other General Hospital spoilers say Franco (Roger Howarth) will drop some bombs on Liz (Rebecca Herbst). He’ll probably reveal the searches he’s got cooking. Franco may have gotten in touch with some of Liz’s family members by then. If he admits that some Webbers are coming to town, Liz may object. Franco’s ignoring her wishes, so that’s something she probably won’t appreciate.

Meanwhile, the judge will hand down his ruling. After Carly’s (Laura Wright) sent to Ferncliff, Jason will seek a way inside. He may need to give Carly a message or just make sure she’s OK. However, GH spoilers say Jason will fear exposure soon enough. He’ll land in a tight spot during the week of June 18-22.

Nelle (Chloe Lanier) and Chase’s (Josh Swickard) shocking link will also blow up that week. They knew each other in the past, so that’ll come as a big surprise to several Port Charles residents. When Dante (Dominic Zamprogna) and Michael (Chad Duell) get the scoop, they’ll want answers from Chase immediately. You can bet they’ll wonder why Chase never said anything before.

Of course, Chase may have a good explanation. Nelle’s a woman of many names, so he may not have put it all together. Elsewhere, Sam (Kelly Monaco) will find Alexis’ (Nancy Lee Grahn) actions admirable. Since Alexis is helping Kiki (Haley Erin) with her fight against Dr. Bensch (James DePaiva), that might be what Sam respects.

Maybe Sam could even team up with Curtis (Donnell Turner) and help Kiki out. There has to be some dirt to find on this creepy doc! Back with Liesl, she’ll hide her trail and hope she doesn’t get caught. It sounds like someone could be closing in on Peter and the secluded cabin chaos.

Liesl may have to scramble as her plot falls apart. We’ll give you updates as other General Hospital news comes in. Stay tuned to ABC’s GH and don’t forget to check CDL often for the latest General Hospital spoilers, updates and news.