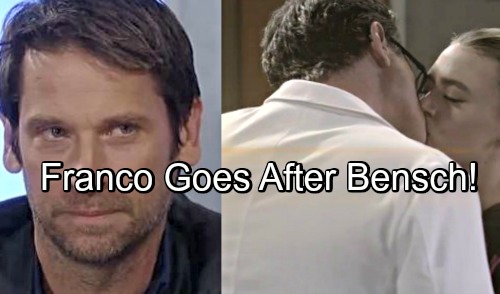 General Hospital (GH) spoilers tease that Franco Baldwin (Roger Howarth) will hear about Kiki Jerome’s (Hayley Erin) stunning accusations. She’s trying to take down Dr. David Bensch (James DePaiva), but Kiki would rather leave Franco out of it. Of course, Kiki won’t be able to do that for long. Franco will inevitably get the scoop soon and when he does, Dr. Bensch could face his wrath.

Franco nearly overheard the shocker when Kiki was discussing it with Liz Webber (Rebecca Herbst). They managed to hide the truth, but Kiki’s about to go public. Franco will surely learn what’s up once the story spreads. He may even overhear some terrible tidbit before the article gets published.

Since Franco just relived the trauma of childhood sexual abuse, that should make him even more enraged. Franco’s extra sensitive to the issue right now, which can’t be good news for Dr. Bensch. All of his anger could really boil over!

If Franco decides to seek revenge, it wouldn’t be the first time. General Hospital viewers will recall when Franco went after Liz’s rapist, Tom Baker (Don Harvey). In 2016, Franco locked Tom in a dog cage and kept him prisoner for several days.

Kiki worried that if Franco heard about Dr. Bensch’s harassment, he might react violently. She doesn’t want to trigger a meltdown and drag him back into old habits. However, Franco’s been working hard to overcome his dark history. GH probably doesn’t want to undo the progress he’s made, so they may go for a sneakier approach instead.

Franco may be tempted to choose an aggressive tactic, but a good acting job would work just as well. He just has to make Dr. Bensch think he’ll cross a deadly line. With a reputation like Franco’s, that wouldn’t be difficult at all. Franco could toss around some vicious threats and rock Dr. Bensch to the core.

Dr. Bensch doesn’t realize that Franco believed Kiki was his daughter for many years. Franco still thinks of Kiki in that way, so he could turn into a VERY protective stand-in father. General Hospital spoilers say there could be quite a showdown.

Will Dr. Bensch be shaking in his boots? Could Franco run the creep right out of Port Charles? We’ll give you updates as other GH details emerge. Stick with the ABC soap and don’t forget to check CDL often for the latest General Hospital spoilers, updates and news.