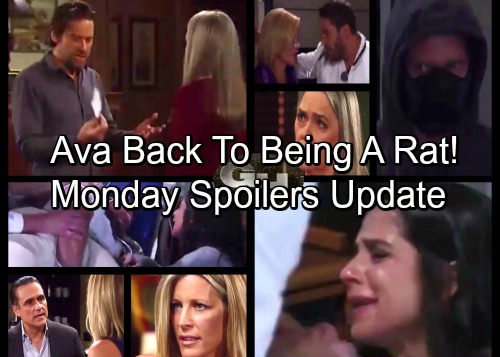 General Hospital (GH) spoilers update for Monday, September 25, tease that Sam (Kelly Monaco) will freak when Jason’s (Billy Miller) health takes a hit. At the long-term care facility, Jason’s monitors will go nuts. Sam will bend down beside her husband as she urges him to stay with her. It appears Jason will have a seizure, but his doctors will get everything under control soon.

Unfortunately, Jason may fall back into a coma after this frightening ordeal. Sam’s struggles are far from over. At the clinic, Ava (Maura West) will find herself backed into a corner. Dr. Klein will discover that Patient Six (Steve Burton) gave out some info. He’ll tell Ava to hand it over or risk never having her face restored. 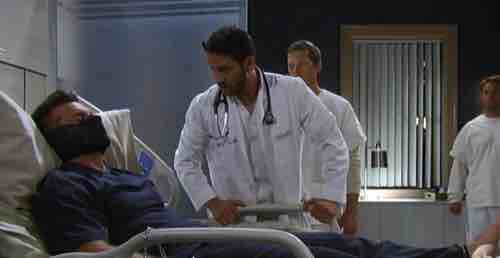 Ava suspects Patient Six is telling the truth, but she can’t be sure. Besides, Ava isn’t the kind of gal who typically puts other people first. She’ll decide to hand over the phone number and keep her dream intact.

When Dr. Klein makes the call, GH spoilers say Sonny (Maurice Benard) will be on the other end. Patient Six’s attempt to contact the outside world will result in severe punishment. He’s really having a rough time in St. Petersburg.

Back in Port Charles, Franco (Roger Howarth) will deal with his own issues. Betsy (Deborah Strang) admitted that Franco’s twin theory was partially correct. There’s indeed a brother, but it’s not Franco’s. Franco will demand an explanation, but will Betsy give him one? Regardless, it shouldn’t be too hard for Franco to figure this out. Jason obviously had a twin, but more questions are ahead in this hot plot. 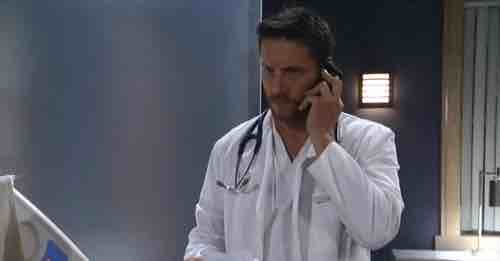 Across town, Sonny will encourage Carly to get real. He’ll wonder if she truly believes Nelle is guilty of murder. Carly won’t be certain, but she won’t see why they should automatically assume Nelle is innocent. Her track record will work against her as this storyline heats up.

Elsewhere, General Hospital spoilers state that Nina (Michelle Stafford) will stand up for Valentin (James Patrick Stuart). It looks like Griffin (Matt Cohen) will confront Valentin about Ava. He’ll probably suggest that Valentin should cut out all his shadiness. It might be the only way to keep Charlotte in his life.

Nina will insist that Charlotte’s custody is none of Griffin’s business. She’ll think he should butt out and find someone else to pester. Nevertheless, Griffin will hope he can free Ava from Valentin’s grasp. We’ll give you updates as other GH news comes in. Stay tuned to the ABC soap and don’t forget to check CDL often for the latest General Hospital spoilers, updates and news.