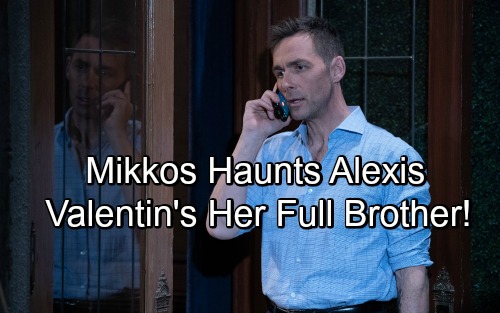 General Hospital (GH) spoilers tease that Alexis Davis (Nancy Lee Grahn) has a huge clue in her possession. Valentin Cassadine (James Patrick Stuart) handed over an envelope containing a diamond-encrusted watch. It looks like this beautiful piece of jewelry could be the key to a long-held secret.

Alexis is curious about Mikkos Cassadine (John Colicos), but the story could head in a surprising direction. This hot plot could be shifting toward Valentin and his blood relationship with Alexis. When Alexis first appeared in Port Charles, she was revealed as the illegitimate daughter of Mikkos and Kristin Bergman. Kristin was a Swedish opera singer described as “the mistress whom Mikkos loved.”

Alexis was just a kid when Helena Cassadine (Constance Towers) brutally murdered Kristin. The poor girl had to watch Helena slit her mother’s throat and cut out her vocal cords. At the time, Helena didn’t know Alexis was Mikkos’ daughter. She only knew that Kristin was Mikkos’ mistress.

Helena found out about Alexis and her younger sister, Kristina, many years later. Alexis eventually named her own child after her little sis, but let’s focus on the older Kristina. She was given away for adoption and Alexis was brought to the Cassadines under the guise of being the daughter of Mikkos’ sister.

Alexis returned to the scene of the crime to retrieve her sister, who’d been hidden in a barn for protection. Unfortunately, Kristina had already vanished. Before Alexis could return, Mikkos sent out his men and rescued Kristina.

As a result of all this trauma, Alexis developed partial amnesia and forgot her true identity for a while. After she found Kristina again in 2001, Alexis revealed everything she could remember about their mother. She recalled Kristin wearing a diamond and sapphire necklace at the time of her death. That could be how General Hospital will connect the past and present.

The watch in the envelope would’ve coordinated with the necklace. It’s possible Kristin was also wearing this watch when she died. If so, major GH bombshells are brewing. Let’s consider how this watch might lead to some discoveries about Valentin.

Could Kristin have been pregnant with Mikkos’ THIRD child when she was killed by Helena? Did Alexis block out her mother’s pregnancy and other important details? If Kristin didn’t die immediately, the baby could’ve been saved via emergency C-section. This kid could’ve grown up to be Valentin Cassadine, which would make him Alexis’ full brother instead of her half-brother.

Valentin was only five years old when Mikkos supposedly disowned him and sent him to boarding school. Since he was so young, Valentin may not have recalled the correct facts. There’s even a chance that Helena brainwashed him into believing that story.

Perhaps Helena meddled with Mikkos’ will so Stavros Cassadine (Robert Kelker-Kelly) would inherit everything. She could’ve been behind the addendum of Valentin being disowned. If Valentin was Kristin’s, Mikkos would have wanted to protect him just like his daughters. He wouldn’t have rejected Valentin and left him to fend for himself.

A much older Valentin probably found the watch after Helena died. There might’ve been several Mikkos-related items on Cassadine Island. What will Alexis do if she realizes Valentin’s her full sibling? She already seems haunted by Mikkos, so this could bring up more repressed memories.

At this point, Valentin may not know Kristin was also his mother. By helping Alexis, he may uncover some shockers about himself! Will Alexis remember her mom’s pregnancy and put it all together?