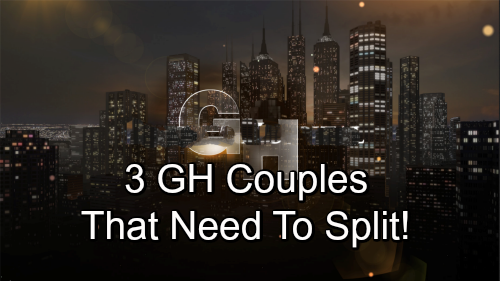 General Hospital (GH) spoilers tease that several soap couples are on the verge of happening. A reunion between Jason (Steve Burton) and Sam (Kelly Monaco) may be on the horizon. Ava (Maura West) also seems to be inching toward “Kevin” aka Ryan (Jon Lindstrom). However, a few other pairings are either fading fast or at least should! Here are three GH couples that need to split.

Dominic Zamprogna recently reprised his role as Dante in a special Sonny (Maurice Benard) fantasy episode. Alas, there are no plans for a full-time comeback right now. General Hospital has left the door open for Zamprogna’s return one day and we don’t blame them. Some roles are trickier to recast than others. Zamprogna’s Dante would be tough to replace, especially since so many GH fans love him.

With that in mind, Dante may remain on his mission indefinitely. If that’s the case, there’s no need to leave Lulu (Emme Rylan) pining. General Hospital should start rev up the strain and get this “Lante” divorce started. That way Lulu can move on and get a new love story. If Dante ever comes back in the picture, GH will have a built-in return storyline. Dante can try to win Lulu’s heart all over again!

There are undoubtedly some “Fanna” fans and if you fall into that category, more power to you. It’s great to support a pairing you love. Unfortunately, not everyone’s feeling Finn (Michael Easton) and Anna’s (Finola Hughes) chemistry. They’re an odd duo and their storyline has been pretty repetitive so far. They always get roped into some risky adventure and Finn grumbles his way through it.

Finn and Hayden (Rebecca Budig) seemed to have a bit more support. Since Hayden recently reached out to Finn, that’s only made Hayden fans more eager to have her back. That may not happen anytime soon, but Finn and Anna could still break up over what’s in store. They’ve been solid for a while now, so it’s probably time to rock the boat and send them down new romantic paths.

To be fair, Kim (Tamara Braun) and Julian (William deVry) are pretty cute together. Kim sparkles with “Charlie” and she’s been good for him lately. Nevertheless, Julian will never be able to shake his true love. Alexis (Nancy Lee Grahn) has his heart and always will. Likewise, Alexis may never truly be able to get over Julian.

It’s going to be tough for General Hospital to sell anything but “Julexis” at this point. They have a messed-up history, but sometimes chemistry just has to win out. Julian and Alexis always light up the screen, so let’s hope GH revisits the duo down the road.