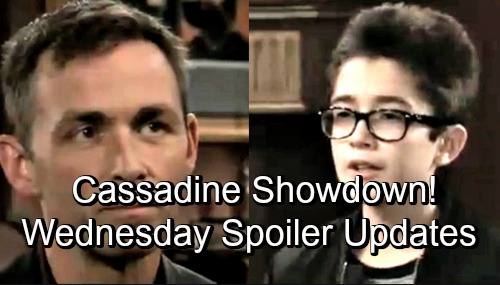 General Hospital (GH) spoilers for Wednesday, November 21, tease that Laura (Genie Francis) will blast “Kevin,” who’s actually his evil twin. Ryan’s (Jon Lindstrom) been wreaking havoc in Port Charles as well as in Laura’s heart. She’ll push “Kevin” for the truth about why they broke, but he won’t think she wants to hear that. Ryan will argue that the truth hurts, so Laura should just leave it alone.

However, Laura will keep at it and that means Ryan may have to hit hard. He doesn’t need anymore of this drama, so he may admit that he’d rather be with Ava (Maura West). Meanwhile, Kristina (Lexi Ainsworth) will have a little fun with her dad. Sonny (Maurice Benard) will joke around with Kristina and insist that she should come with him. He may want her to hang out with the fam instead of her friends.

That’s probably for the best since Kristina’s besties with Daisy (Kelsey Wang) now. The girl’s clearly recruiting Kristina for a cult, so that can only lead to bad news. Over with Josslyn (Eden McCoy), she’ll wish Cameron (William Lipton) a happy Thanksgiving when he arrives. Cameron will quickly turn serious. He’ll have a confession to make, but he’ll ultimately spill more than he expected.

Cam will want Joss to know that he’s truly falling for her, but the truth about Oscar (Garren Stitt) may come out in the process. If not, Josslyn will at least be on the right track. Elsewhere, Ava and Nina (Michelle Stafford) will face off. After Nina’s brought up to speed on Sasha (Sofia Mattsson) getting roofied, she’ll go into full-on Mama bear mode.

Nina will make it clear that Ava can’t target her daughter like this. Unfortunately, GH fans know Sasha isn’t Nina’s biological cihld after all. Since she’s still in the dark on that, Nina will continue to bond with Sasha and fiercely defend her.

Speaking of Sasha, she’ll walk in on Valentin (James Patrick Stuart) and Spencer’s (Nicholas Bechtel) fight on Wednesday. Sasha will sense that she’s interrupting, but that’s undoubtedly a good thing. Valentin doesn’t need to be threatening a kid anyway!

Back with Oscar, he’ll be torn about his Thanksgiving plans. Oscar won’t want to spend it with his relatives, but Alexis (Nancy Lee Grahn) won’t want him to be lonely. She’ll most likely encourage Oscar to join her family’s gathering if he won’t go to his own.

Other General Hospital spoilers say Sam (Kelly Monaco) will have a case of the sniffles. She’ll be coming down with something when Jason (Steve Burton) arrives, but he won’t be scared off. In fact, Jason will be more than willing to take care of Sam.

They’ll still enjoy some bonding time with Danny (T.K. Weaver), but Sam will have to head to bed eventually. Jason will keep her company upstairs, which will lead to some hilarious confusion between Danny and Alexis. Wednesday’s episode will set up additional “JaSam” fun on Monday, so stay tuned.

General Hospital viewers will want to check out all the great stuff ahead. We’ll give you updates as other GH details emerge. Stick with the ABC soap and don’t forget to check CDL often for the latest General Hospital spoilers, updates and news.