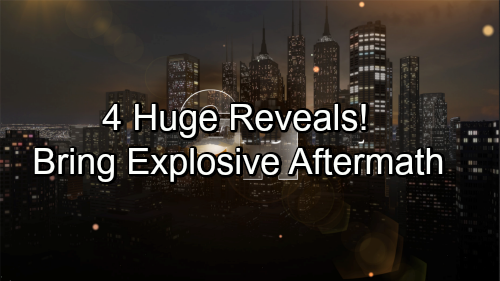 General Hospital (GH) spoilers tease that some serious bombs will drop on the ABC soap. GH is gearing up for some stunning revelations, so fans are anxious to see how everything will play out. Let’s consider what’s ahead and how it’ll all unfold. Here are four shockers that’ll shake up Port Charles.

Ever since Nelle (Chloe Lanier) traded Jonah for dead Wiley, the countdown has been on. We all know it’s just a matter of time until Michael (Chad Duell) learns the truth about his son. Of course, some smaller revelations could change the game first.

Willow (Katelyn MacMullen) is certainly an anonymous birth mom possibility, so she could be step one on Michael’s journey to the real story. Nelle will undoubtedly stir up more trouble for Brad (Parry Shen) as well. She’s always got a few tricks up her sleeve.

General Hospital spoilers say Michael will keep finding new clues, so things should come into focus at some point. When Michael finally realizes Jonah’s alive and well, he’s sure to be furious with both Brad and Nelle. Chad Duell should get some top-notch Daytime Emmy reel material out of the aftermath!

Valentin (James Patrick Stuart) has set himself up for a fall with his latest plot. He tricked Nina (Michelle Stafford) into thinking Sasha (Sofia Mattsson) was her biological daughter, but that’s not true. Once Nina finds out about Valentin’s deception, she’ll inevitably explode in rage and heartbreak. On the bright side, this should set up the reveal of Nina’s actual daughter. That could be a bright spot!

Poor Kevin (Jon Lindstrom) is being drugged out of his mind in a mental institution while Ryan (Jon Lindstrom) derails his whole life. Kevin would hate if he knew how much Ryan was hurting Laura (Genie Francis). He also wouldn’t be happy about Ryan’s interest in Ava (Maura West) or his brother’s murder streak, which kicked off with Mary Pat (Patricia Bethune).

Ryan will get caught sooner or later, but not before more damage is done. Another killing or two should leave PC reeling. Carly (Laura Wright) is determined to learn the identity of the mystery patient, so will she learn “Kevin’s” real identity, too? That’s one option to consider. Laura’s also eager to figure out the truth behind Kevin’s personality change, so Laura and Carly seem like the biggest threats.

General Hospital spoilers hint that Drew (Billy Miller) will get some intriguing news during the week of December 3-7. Could that involve the flash drive? It looks like Margaux could have a change of heart about handing it over eventually. She might offer a new deal or even just give it as a peace offering. Margaux’s pretty broken these days, so it could leave her weary and in need of a good deed.

Drew has said that he doesn’t want to take the risk anyway, but Oscar’s (Garren Stitt) ordeal could shift his opinion. Since Oscar will probably end up in that clinical trial, Drew may decide his own risk is worth it. General Hospital would be leaving drama on the table if they didn’t explore Drew’s true past. What’s buried in that mind of his? GH fans are eager to hear all about his history and secrets.

Which shockers are you looking forward to the most? We’ll give you updates as other details emerge. Stay tuned to the ABC soap and don’t forget to check CDL often for the latest General Hospital spoilers, updates and news.