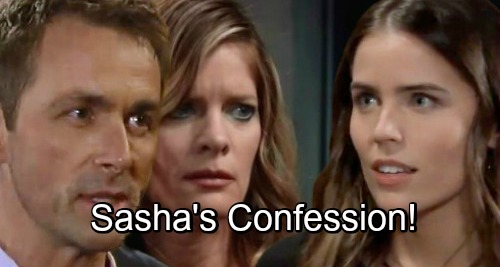 General Hospital (GH) spoilers tease that Sasha’s (Sofia Mattsson) soft side could finally be coming through. She’s obviously pretty manipulative since she’s been scheming with Valentin (James Patrick Stuart). It takes a special kind of person to pretend to be someone’s daughter for money. That’s exactly what Sasha signed on for, but things could be inching in a different direction.

Sasha was pretty rattled after Ava’s (Maura West) latest stunt. GH fans know Ava drugged Sasha’s soup and put a naked Griffin (Matt Cohen) in bed next to her. Thankfully, Griffin figured out the truth, but Sasha was still shaken up. She went to Valentin and suggested maybe she should leave town after all, but he changed his tune and offered more cash.

Sasha agreed to stick around, which means she’ll have more time to bond with Nina (Michelle Stafford). Even thought this all a ruse, Sasha definitely seems to like her fake mom. We don’t know the truth about Sasha’s past, but maybe the rest of her story’s accurate. If Sasha’s other mother really passed away, she may have a hole in her heart. Sasha may genuinely be trying to fill that void.

General Hospital spoilers state that Nina will head to the ballet with Charlotte (Scarlett Fernandez) soon. It looks like Sasha will tag along, so she may feel like they’re becoming a family. Part of Sasha might love that, but another part of her could feel tremendous guilt.

Perhaps that could be a twist that comes out of this. Everyone’s been expecting Sasha to turn on Valentin out of greed or simply slip up. What if Sasha’s conscience becomes the real threat? It could happen based on the way things are going.

Sasha might corner Valentin and insist that she can’t keep lying to Nina – a woman she’s come to genuinely care about. She might plan to come clean, so Valentin would undoubtedly try to stop her. He might offer more money, but he’d resort to digging up dirt if that didn’t work. In fact, Valentin’s probably got some dirt already! It’s doubtful he’d kick off a plot like this without being prepared.