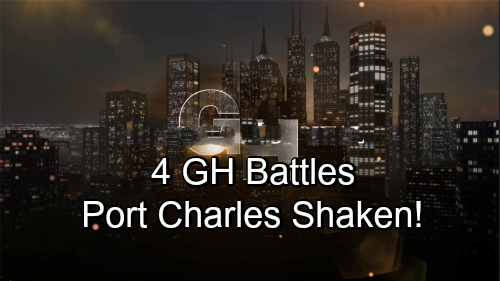 General Hospital (GH) spoilers reveal that some wars are about to break out in Port Charles. GH fans can expect several showdowns in the coming weeks. They’ll all be pretty intense and could set up even more shockers, so let’s take a look at some of the action. Here are four brewing battles and how they’ll affect the current storylines.

Since Charlotte (Scarlett Fernandez) is bullying Aiden (Jason David), a big secret is set to explode. General Hospital even teased the drama a bit. Liz mentioned Aiden’s issues to Lulu, who responded that Charlotte was going through a phase of her own. They wished each other luck, but they have no idea that their kids’ problems are connected. That means GH has some heated confrontations in store!

Once Liz realizes Charlotte is the kid who’s targeting Aiden, she’s sure to hit the roof. Aiden might break down and mention it at some point. Then again, the truth could come out another way. Regardless, Liz will unleash her wrath and most likely offend Lulu. Although Lulu knows Charlotte’s in the wrong, she may not appreciate how Liz wants to handle all this.

Next, we’ve got Chase (Josh Swickard) and Michael’s (Chad Duell) battle for love. They’ve both got their eye on Willow (Katelyn MacMullen), so there’s bound to be some tension in this love triangle. Chase already made his move, so he won’t be happy if Michael swoops in and steals Willow’s heart. General Hospital spoilers say some gripping scenes are in the works, so stay tuned.

Valentin (James Patrick Stuart) had good intentions when he reunited Nina (Michelle Stafford) with her long-lost “daughter.” Part of his motive undoubtedly involved setting his own reunion in motion, but there was a less selfish motive, too. Valentin only wants Nina’s happiness and the Sasha (Sofia Mattsson) lie has given her that.

Sadly, Sasha isn’t the real deal and that means this is going to blow up in Valentin’s face. General Hospital spoilers say we’ll soon see the war of the century. Valentin has crossed a line he never should’ve crossed. It’ll be tough to come back from a bombshell this devastating.

Margaux (Elizabeth Hendrickson) and Carly (Laura Wright) already don’t get along, but things are about to get far worse between them. Sonny’s (Maurice Benard) trying to make peace, but that plan may work a little too well. GH seems to be hinting at a brewing romance, so Carly may go after Margaux with everything she’s got. Nobody takes Carly’s man and gets away with it.

That’s it for our brewing battles preview! We’ll give you updates as other GH news comes in. Stay tuned to the ABC soap and don’t forget to check CDL often for the latest General Hospital spoilers, updates and news.