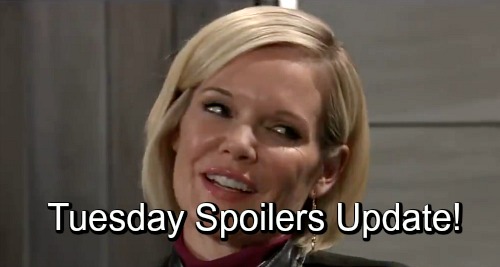 General Hospital (GH) spoilers for Tuesday, November 20, tease that Ava (Maura West) will be brimming with confidence. Carly (Laura Wright) knows Ava’s always pretty sure of herself, but she’ll still feel like something’s up. She’ll ask what’s got Ava so brazen today, but her enemy will only offer a little hint. Ava will simply indicate that things are turning around for her, so she’s got hope for the future.

In Sasha’s (Sofia Mattsson) hotel room, chaos will be unleashed. As Kiki (Hayley Erin) enters to find Sasha in bed with Griffin (Matt Cohen), she’ll cry out and most likely awaken the sleeping beauties. General Hospital spoilers say Kiki will be both crushed and enraged, so she’ll undoubtedly lash out.

However, Sasha and Griffin won’t be able to explain their behavior. They should be confused thanks to Ava’s sneaky tactics, so this situation should get messy. Over with Stella (Vernee Watson), she’ll continue her conversation with Marcus (Nigel Gibbs). These former flames have enjoyed catching up, but there’s a faint ache between them. They were very much in love many years ago.

As Stella reflects on their history, Marcus will make an admission. He’ll regret not taking full advantage of what they shared when they shared it. Wasted time will haunt Marcus as well as Stella. Their romance slipped away due to circumstances beyond their control, but they’ll look back on those moments fondly. Who knows? Perhaps the future will hold a second chance…

Other GH spoilers say Jordan’s (Briana Nicole Henry) bachelorette party will bring drama. She’ll be stuck with Maxie (Kirsten Storms), Lulu (Emmy Rylan), Anna (Finola Hughes) and several other guests. Jordan will demand that the door be opened, but that plan won’t pan out. These ladies aren’t going anywhere for a while, so they’d better settle in for a long night.

The same goes for Curtis (Donnell Turner), who’ll be trapped with his bachelor bash buddies. They won’t be getting out until morning, but they’ll try to make the best of it. Peter (Wes Ramsey) will eventually end up somewhere with a locked door. He’ll shake the knob, so maybe he’ll stumble across Maxie and the girls’ shindig. Peter could stand to do a few more good deeds, so let’s hope he can help.

Across town, Ryan (Jon Lindstrom) will face another round of Laura (Genie Francis) clashing. He’s posing as Kevin (Jon Lindstrom) and carrying out some brutal schemes, but Laura will remain a thorn in his side. Ryan thought he could dump her and be done with it, but Laura’s not finished yet. She’ll find “Kevin” on Tuesday’s new GH episode, November 21, and insist on another confrontation.

Laura will want some answers regarding Ava and any lingering issues between them. She’d like to get a better grip on why they broke up, but Ryan can’t give her the truth. Instead, “Kevin” will offer other excuses and hope Laura finally backs off.