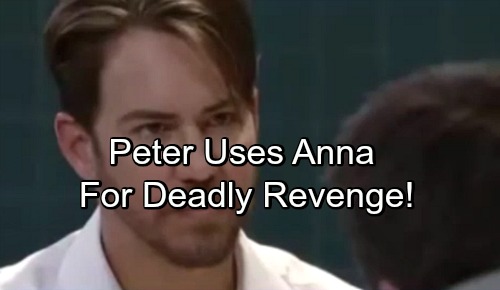 General Hospital (GH) spoilers tease that Anna (Finola Hughes) will be on a mission to make things right. She’ll have plenty of work to do as she kicks off her efforts. Now that Anna knows who her son is, she’ll have to decide how to handle all this. Anna should feel overwhelmed, but she’ll still hold out hope for peace.

Before Anna can focus on Peter (Wes Ramsey), there’ll be someone else who deserves an explanation. General Hospital spoilers say Robin (Kimberly McCullough) will have a crucial chat with her mom. Anna will spill the whole story and try to make Robin understand what she was up against. She’ll apologize for her lies and admit she wants to connect with Peter if possible.

The fact that Peter held Jason (Steve Burton) captive will surely be a huge issue for Robin. Anna can do what she wants, but Robin may shut her half-brother out. Under the circumstances, Anna would undoubtedly accept that choice.

However, Anna will feel like she has to find a way to make amends. Anna doesn’t really know Peter, but she’d like to. He’s her son and nothing can change that. GH spoilers say Anna will do her best to bond with Peter in the months ahead. It looks like Peter will get off the hook for his crimes, so that’ll give Anna her shot.

Of course, growing closer to Peter won’t be easy. He currently wants nothing to do with Anna, but will he change his mind sooner or later? That seems likely, but there’ll always be questions about Peter’s motives. Robert (Tristan Rogers) will certainly be wary as Anna commits to supporting her sneaky son.

Anna has been adamant that Heinrik is just misguided. She blames Faison (Anders Hove) for their boy’s shortcomings and any dark desires. Nevertheless, evil is in Peter’s blood and he just can’t be trusted. Will he play Anna like a fiddle? Will Peter let Anna in his life only to seek the revenge he craves?

As long as Maxie (Kirsten Storms) hates his guts, Peter has nothing left to lose. That could lead to extreme danger for Anna, so let’s hope Robert can watch out for her. General Hospital spoilers say more excitement’s looming, so stay tuned. We’ll give you updates as GH other news comes in. Stick with the ABC soap and don’t forget to check CDL often for the latest General Hospital spoilers, updates and news.