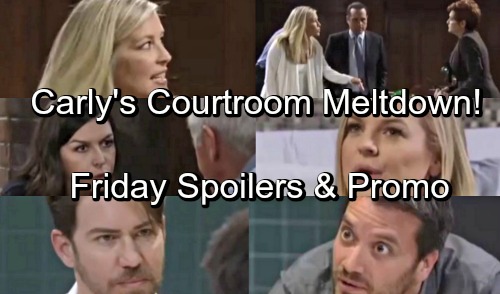 General Hospital (GH) spoilers for Friday, May 25, tease that Mac (John J. York) and Felicia (Kristina Wagner) will pay Maxie (Kristen Storms) a visit. They’ll show up at GH and hope they can see the baby soon. Maxie may offer a glimpse of the NICU cam, but she’ll also have to fill them in on the Peter (Wes Ramsey) drama. She’ll urge them to sit down since she’s got quite a story to tell.

Later, it looks like Lulu (Emme Rylan) will pop in as well. She’ll feel responsible for letting Peter get so close to Maxie, but it’s not really her fault. Maxie will hold herself accountable for not seeing the warning signs. Peter’s exposure will actually help Lulu and Maxie start to patch things up.

Lulu will also speak with Nina (Michelle Stafford) again on Friday. They’ll discuss the latest chaos and try to move forward. Valentin (James Patrick Stuart) will be desperate to earn Nina’s forgiveness, but he’ll realize that it’s going to be tough. General Hospital spoilers say Nina will declare that she’s done. She’ll be fed up with Valentin’s constant deception, so their marriage is certainly in jeopardy.

Elsewhere, Robert (Tristan Rogers) will be irritated with Anna (Finola Hughes). He’ll hate that she blew the plan and put herself in danger. General Hospital spoilers state that Anna will stand by her actions. She’ll insist that telling the truth was the only way to stop Jason (Steve Burton). Anna couldn’t bear the thought of watching her son get shot down.

At the police station, Dante (Dominic Zamprogna) will lash out at Peter. GH fans know Dante and Nathan (Ryan Paevey) were partners as well as close friends. When Peter refers to Nathan as his brother, Dante’s anger will explode. He’ll snarl that Peter had better not call Nathan that ever again.

Over with Nelle (Chloe Lanier), she’ll continue to play the part of a selfless victim. Once she gets updates on the court case, Nelle will talk about how rough this must be for “poor Carly.” She’ll pretend to take pity on her enemy, so Michael (Chad Duell) will probably fall for it hook, line and sinker.

Meanwhile, Carly will have a courtroom meltdown. She’ll bicker with Diane (Carolyn Hennesy), who’ll want her client to plead guilty by reason of insanity. General Hospital spoilers say Carly will refuse at first, but Diane will feel like this is her only shot at avoiding the slammer.

Carly will have to get on board, but even an insanity defense will come with some problems. We’ll keep you posted as other GH news comes in. Stay tuned to the ABC soap and don’t forget to check CDL often for the latest General Hospital spoilers, updates and news.