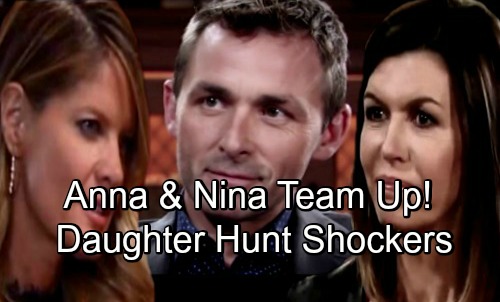 General Hospital (GH) spoilers tease that Nina (Michelle Stafford) will try to keep hope alive. She doesn’t have a lot to go on as she searches for her long-lost child. Nina doesn’t even know if her hunch is correct. She just knows she desperately wants a kid and Madeline (Donna Mills) seemingly left her a message.

Since the half heart pendant is all she’s got, Nina will do her best to make it work for her. Unfortunately, she’ll hit some snags soon enough. Nina will want to believe her child’s out there, but she’ll definitely struggle in the coming weeks. Doubts will creep in, so Nina will consider throwing in the towel.

That’s especially true with Maxie (Kirsten Storms) the naysayer lurking around. No one can blame her for wanting to protect Nina, but she could inadvertently cause more setbacks. After Nina doesn’t score much info, Maxie may think she should ditch the hunt and focus on something more productive.

Nina might take that advice initially, but it could end up renewing her fight later. General Hospital spoilers say Nina will spend some time with Charlotte (Scarlett Fernandez). She adores that little girl, but she’d still love to have one of her own.

Luckily, Nina’s daughter indeed exists. Once Nina and Charlotte bond again, it could convince Nina that she has get back to the search. She may realize that she can’t live a life of waiting and wondering. Next, it looks like Anna (Finola Hughes) will enter the story.

GH fans will recall that she overheard Valentin on the phone. She heard him speak about finding Nina’s child, so she could be useful here.

Anna suggested that Valentin had a habit of misplacing kids and warned him to stay away from Peter (Wes Ramsey). Since Valentin and Nina are on the verge of finalizing their divorce, Anna might hear what Nina’s up to and try to help. She may feel like she has to step up and protect another kid from getting tangled up in Valentin’s mess.

General Hospital spoilers state that Anna and Nina will come together in a surprising way this fall. That lines up with this daughter search. Anna could be the one to help crack the case, but they can’t keep this a secret from Valentin indefinitely. Sooner or later, all these hunts have to collide.

GH viewers won’t want to miss all the stunning revelations. We’ll give you updates as other news comes in. Stay tuned to the ABC soap and don’t forget to check CDL often for the latest General Hospital spoilers, updates and news.