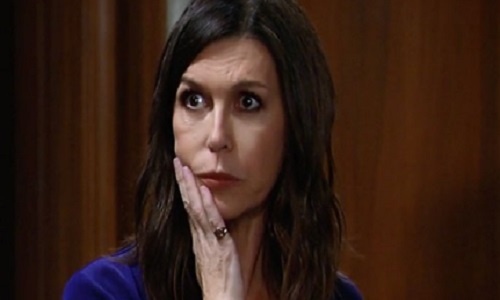 General Hospital (GH) spoilers tease that Anna (Finola Hughes) has a whole lot of trouble headed her way. After a chat with Finn (Michael Easton), Anna decided to repair her relationship with Robin (Kimberly McCullough). Finn suggested that sometimes time can become a barrier, so it’s best to repair the damage as soon as possible. That’s why Anna intends to fly back to Berkeley and patch things up.

Unfortunately, that armed taxi driver must have other plans! It looks like Anna will be kidnapped and taken somewhere besides her desired destination. Of course, this raises some interesting GH questions. Who’s behind Anna’s predicament and why? Who will ultimately come to her rescue? General Hospital spoilers say some hot drama ahead, so let’s consider all the details.

During Valentin’s (James Patrick Stuart) recent argument with Nina (Michelle Stafford), Anna’s name came up. Nina feels like Valentin always finds a way to keep Anna in his life. Their fights tend to revolve around her, so Valentin is certainly a kidnapping candidate.

Just before Anna was seen in the cab, Valentin got on the phone and orchestrated a mission for Nina’s sake. He declared there was no margin for error. It’s possible Valentin wants Anna out of the picture while he handles his marriage crisis.

Nevertheless, there are other options to consider. Liesl Obrecht (Kathleen Gati) has been messing with Anna lately, so we can’t rule her out. However, Liesl’s been pretty busy with Peter (Wes Ramsey) and she typically prefers to take care of her own plots. She doesn’t like to hand them off to minions if she can help it.

Cassandra’s (Jessica Tuck) name was also mentioned lately, so it’s possible she’s miraculously out of her coma and targeting Finn. Someone Cassandra knows could even be out for revenge. Whatever the case, General Hospital spoilers say Anna will find herself in quite a mess. Finola Hughes usually takes some time off in the summer, so this seems like an easy strategy to explain her absence.

Unfortunately, Finn thinks Anna will be off making amends with Robin. That’ll make it hard for him to pinpoint exactly when and where Anna went missing. However, there’s a good chance Finn will suspect Valentin’s involved. In the midst of his panic and rage, Finn may confront Valentin and demand answers. He warned Val to steer clear of Anna, so he’ll want to make the devious Cassadine pay!

Is Valentin really to blame or is someone else behind the kidnapping? Will Finn step up to save Anna from danger? Will he get Robert (Tristan Rogers) to pitch in as well? We’ll give you updates as other GH news comes in. Stay tuned to the ABC soap and don’t forget to check CDL often for the latest General Hospital spoilers, updates and news.