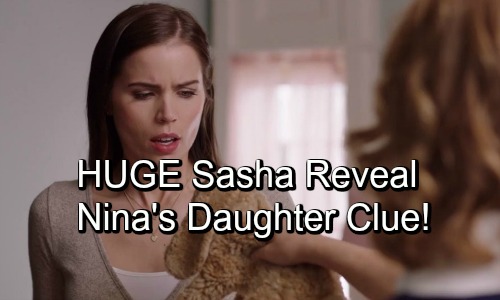 General Hospital (GH) spoilers tease that another hint may have surfaced regarding Nina’s long-lost daughter. This one actually falls outside the realm of GH, but it’s still an interesting tidbit. Before we get to that, let’s consider the latest story developments. Curtis Ashford (Donnell Turner) suspects Sasha Gilmore (Sofia Mattsson) is Nina Reeves’ (Michelle Stafford) kid, so he’s working on proving it.

Many General Hospital fans have noticed the striking resemblance between Mattsson and Kelly Thiebaud (Britt Westbourne). Britt gets her brunette beauty from Mama Liesl Obrecht (Kathleen Gati), but Sasha’s potential father may be responsible for hers. If Sasha is Nina’s daughter, that means her father was Silas Clay (Michael Easton). Sasha could most definitely pass for their child.

Britt and Nina are also first cousins, so there’s another explanation for the family resemblance. General Hospital has really done a great job with casting here. Of course, we have to mention all the Kiki Jerome (Hayley Erin) hints. GH writers seemingly want us to believe that Kiki is Nina’s long-lost daughter instead.

There’s a chance that Kiki’s just a red herring, but we certainly can’t rule her out. It’s logical to assume that Kiki could be Nina’s child. Silas was her father also and the timeline was right. After all, Silas was having an affair with Ava Jerome (Maura West) while Nina was pregnant and in a coma.

General Hospital offered another clue when Ava was pregnant with Avery (Ava and Grace Scarola). She was spotted reading a book for first-time mothers, so that was awfully suspicious. Shouldn’t Ava have known what to expect since she’d supposedly been pregnant with Kiki?

Then again, Ava may have just needed a refresher since Kiki was already in her early 20s at the time. Regardless, the book gave us something intriguing to ponder. Ava and Kiki’s current hostility could be another clue about what’s ahead. After a brutal fight, Ava declared that Kiki was no longer her daughter. Maybe General Hospital will turn that dramatic statement into a reality.

That brings us to the outside-of-GH clue we brought up. This may just be one huge coincidence, but it’s too glaring to ignore. It’s at least worth mulling over! On September 21, a Lifetime movie called Long Lost Daughter aired. It starred Sofia Mattsson as a character named Michelle. An older, unrelated woman became obsessed with Michelle, who she believed to be her long-lost daughter.

It’s very likely a GH writer or someone in casting was aware of this movie before its release. It could’ve influenced their decision to look into hiring Mattsson. Her resemblance to Kelly Thiebaud couldn’t have hurt! Even a quick look at Mattsson’s resume could’ve proven beneficial. During the audition process, they may have seen this movie listed as a credit and decided she’d be perfect for the role.

Whatever the case, Mattsson has experience with a similar storyline. Will she turn out to be Nina’s actual daughter or will Kiki be the real deal in the end? General Hospital spoilers say some wild twists are brewing, so we’ll give you updates as other GH news comes in. Stay tuned to the ABC soap and don’t forget to check CDL often for the latest General Hospital spoilers, updates and news.