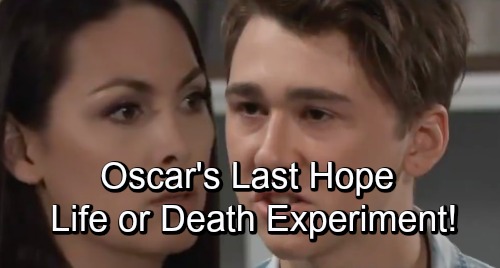 General Hospital (GH) spoilers tease that Oscar (Garren Stitt) will crumble over all the shockers he’s facing. He just found out he has cancer, so that alone was a major bombshell. Oscar tried to tell himself it wasn’t that serious, but Kim (Tamara Braun) and Drew’s (Billy Miller) reactions told a different story.

Oscar will soon accept that he’s dying and there’s nothing he can do about it. Drew and Kim’s lies should make all of this even worse. GH spoilers say Oscar will give his parents the cold shoulder and try to process his imminent death. He’ll struggle as he faces the thought of leaving everything behind.

However, it turns out there’s a glimmer of hope after all. That glimmer comes with some pros and cons. The good news is there’s an experimental treatment that could prolong Oscar’s life. The bad news is the treatment itself could kill him! Oscar is a good candidate for this trial, but it could end up shortening the time he has left. Is that something Oscar will go for?

Kim and Drew will naturally push Oscar to give it a shot. They’ll be on the same page about even just a slim chance of survival. Oscar’s condition is terminal, so he has to use this last opportunity if he wants to stick around. He’s all out of options, which means it’s time to take a risk or make peace with his fate.

Which path will Oscar choose? For drama’s sake, General Hospital may have Oscar resist treatment. He’ll undoubtedly feel the need to rebel after being kept in the dark. Oscar may suggest that he didn’t have any control over when he learned the truth. He could argue that he’s going to control his own destiny from now on.

Oscar can’t change his diagnosis, but he may think he can prevent dying sooner. Again, this clinical trial is risky. Going through with it could mean an earlier death and less time with Josslyn (Eden McCoy). Oscar’s just a scared teen, so that would be tough to sign on for.

Nevertheless, Oscar clearly needs to get with the program before it’s too late! General Hospital spoilers say more family chaos is brewing, but Oscar will probably agree to the treatment eventually. Will it be enough to save him? We’ll give you updates as other GH details emerge. Stay tuned to ABC soap and don’t forget to check CDL often for the latest General Hospital spoilers, updates and news.