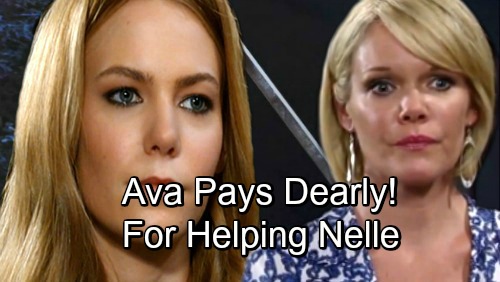 General Hospital (GH) spoilers tease that the jig is up for Ava (Maura West). Griffin (Matt Cohen) now knows that Ava had possession of the infamous blanket that very likely would have prevented Carly (Laura Wright) from being sent to Ferncliff. Carly was, of course, treated horribly at Ferncliff and was nearly subjected to involuntary electroconvulsive therapy that could have damaged her permanently.

It probably won’t be too much longer until others learn about Ava’s secret – that she kept and hid the blanket to use as leverage against Nelle (Chloe Lanier), and that she had Julian (William deVry) plant the blanket back in the Quartermaine nursery only after Carly had endured prolonged suffering at Ferncliff.

And when the secret gets out, watch out. Sure, the information could be used by Sonny (Maurice Benard) against Ava to secure custody of Avery (Ava and Grace Scarola), and that would be pretty bad for Ava. But there are others who will also want to make Ava’s life miserable when they find out…namely, Carly and Jason (Steve Burton).

Thus far, Carly hasn’t expressed much interest in making the people responsible for her recent suffering pay the price. She tormented Nelle some at the police station, but ever since then she’s been dealing with other important matters, like the death of Michael’s (Chad Duell) son and Josslyn’s (Eden McCoy) shoplifting issue.

But chances are, when Carly finds out that Ava indeed helped Nelle and deliberately withheld evidence that would have exonerated her, Carly’s going to be out for blood. And then there’s Jason, who’s very protective of Carly. Imagine how he’s going to react when he learns of Ava’s involvement! He’ll probably go after Ava with everything he’s got!

Ava had better watch out, because she’s going to have a lot of people coming at her for what she did, and virtually nobody except for Julian to support her. Ava’s now alienated nearly everyone in her life, and she’s indeed suffering, but her pain level is probably going to increase once Sonny, Carly, and Jason learn what she did.

Do you think that Carly and Jason will have special plans to make Ava pay for what she’s done? Stay tuned to the ABC soap and don’t forget to check CDL often for the latest General Hospital spoilers, updates, and news.