General Hospital Spoilers: Ava Sleeps with the Enemy, Ryan Lures Her to Bed – Bad News for Kiki, An Affair to Die For? 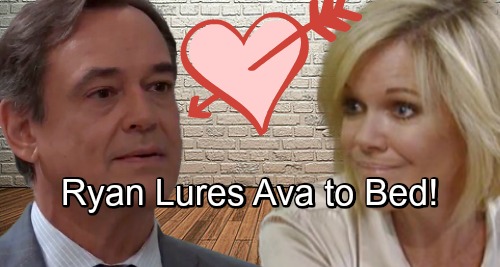 General Hospital (GH) spoilers tease that Ryan (Jon Lindstrom) will keep pulling Ava (Maura West) closer. She has no idea that the real Kevin (Jon Lindstrom) is trapped at Ferncliff. Ava assumes she’s looking at caring Dr. Collins when she sits across from him. That’s why she’s been taken aback by his support of her risky feelings.

“Kevin” certainly doesn’t judge Ava for her vengeful desires. He praises her for her candor instead. Ryan assured Ava that more sessions would be very beneficial, so she’ll make some additional appointments. Ava will enjoy having someone like “Kevin” on her side. It’ll make her feel better about her bubbling resentment and need for revenge, which is exactly what Ryan has in mind.

General Hospital spoilers say Ryan will nurture the most dangerous part of Ava. He’ll strengthen the dark side of her that she constantly struggles to control. Ava is nowhere near as much of a monster as Ryan, but he’ll see serious potential. Ryan may believe he can work with Ava and shape her into his ideal woman. He’ll probably think they can be a dynamic duo in the world of terrible murderers.

Of course, Ryan will have to tread lightly. He can’t push too hard, too fast. Ava will know something’s up if “Kevin” shares how much he values the darkness in her. Ryan will have to rein in his enthusiasm and concentrate on his honesty angle. He’ll keep making Ava feel like she’s right and Kiki’s (Hayley Erin) wrong.

However, Ava will become downright irresistible as time goes on. Ryan will grow increasingly attracted to Ava, so he’ll decide to make his big move. GH fans know Ryan’s been thinking of every excuse possible to avoid Laura (Genie Francis). He has no interest in taking her to bed with him.

Ava, on the other hand, may be a different story. On October 31, General Hospital spoilers say Ryan will do something bold. Will he let Ava know he’d like more than just sessions and chats at the bar? Ava would be surprised, but she might be flattered, too. She’s no stranger to hot hookups with men who are off-limits, so she may consider hitting the sheets with “Kevin.”

Will Ava find herself sleeping with the enemy? Will Laura discover the betrayal and blow her top? Will Ava and Ryan’s connection mean a deadly fate for Kiki? All of that seems likely in the coming months on General Hospital!

Halloween will bring some bombshells and kick off the next phase of this plot, so don’t miss what’s in store. We’ll give you updates as other GH news comes in. Stay tuned to the ABC soap and don’t forget to check CDL often for the latest General Hospital spoilers, updates and news.