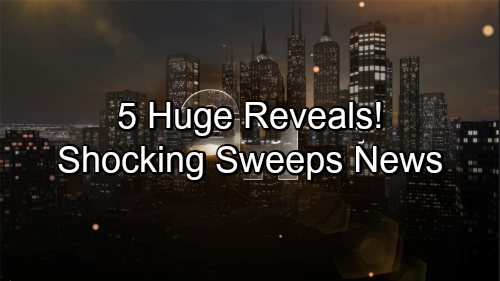 General Hospital (GH) spoilers tease that the ABC soap is moving toward some big revelations. There are some major mysteries underway, so let’s look at some of them. Here are five burning questions the show still has to answer.

Of course, everyone’s wondering what Oscar’s (Garren Stitt) true fate will be. Even Monica (Leslie Charleson) admitted that things look grim. The show could certainly get plenty of drama out of Oscar’s death. However, the clinical trial could be a sign that Oscar will pull through. If Oscar’s just going to die anyway, why not just say there’s no experimental treatment that will help?

Oscar’s dragging his feet on participating, but his loved ones may get him on board soon. Perhaps a miracle’s just around the corner. Of course, it could take an even bigger miracle to save Oscar’s love life. He’s messing up his romance with Josslyn (Eden McCoy) and it may end up being for no reason.

2. Who will discover the twin swap and save Kevin?

Kevin’s (Jon Lindstrom) holding out for a hero, but it’s going to be a while before anyone saves the day. Nevertheless, General Hospital fans know help has to arrive eventually. Carly (Laura Wright) and Laura (Genie Francis) will reach an agreement on October 30. They’ll be in each other’s orbit, so comparing notes could lead to trouble for Ryan (Jon Lindstrom).

If Laura and Carly don’t figure out the truth, there’s always Franco (Roger Howarth) or even Ava (Maura West). Felicia (Kristina Wagner) is another option to consider. The revelation will come too late for some Port Charles residents, but at least Kevin will get rescued sooner or later.

3. How many victims will Ryan take out?

That bring us to the next burning question. Ryan will almost certainly commit murder, but how many lives will be lost? General Hospital spoilers hint that Mary Pat (Patricia Bethune) could be first on the list. Kiki (Hayley Erin) is also a likely victim. That makes two, but the body count will surely be higher than that. GH needs to pile up the corpses if they want Ryan to seem truly evil.

4. What secret’s buried in Finn’s past?

It’s clear that Finn (Michael Easton) has some serious issues with his dad and stepmom. Gregory (James Read) can’t understand why Finn continues to hold a grudge. There must be a reason for the distance between Finn and his stepmother. Gregory pointed out all their similar interests, so Finn may have been involved with her before she became his wife.

If so, that would explain Finn’s outrage back then and his cold demeanor now. It would explain the rushed marriage, too. Finn’s stepmom might’ve wanted to pass Chase (Josh Swickard) off as Gregory’s kid. Finn could have a son and not a younger brother, so that’d be quite a shocker to unleash.

5. Who will expose Brad’s scheme?

Brad’s (Parry Shen) baby swap scheme is set to crumble, but who will be to blame? Nelle (Chloe Lanier) could expose it herself down the road, but there are other ways for the truth to come out. Carly will inevitably dig around and so will Michael (Chad Duell) as more clues arise. Some other surprise threats will emerge as this story progresses, so stay tuned for all the twists and turns.

Which burning questions are you most interested in? What GH bomb are you really looking forward to? We’ll give you updates as other news comes in. Stick with the ABC soap and don’t forget to check CDL often for the latest General Hospital spoilers, updates and news.