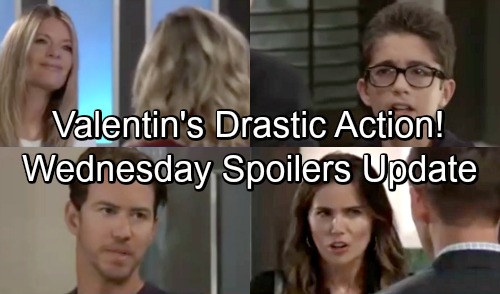 General Hospital (GH) spoilers for Wednesday, October 17, tease that Nina (Michelle Stafford) will fret over the Sasha (Sofia Mattsson) drama. She just wants to get to know her daughter, but Sasha’s putting up a fight. Nina will worry that they’re never going to bond, but Maxie (Kirsten Storms) will push for positivity. She’ll think Sasha hit the bio mom jackpot and will see that soon enough.

While Maxie lifts Nina’s spirits, Valentin (James Patrick Stuart) will take drastic action. If Nina can’t get through to Sasha, maybe Valentin can. He’s at least going to try in Wednesday’s GH episode. General Hospital spoilers say Sasha will be annoyed when Valentin approaches. She’ll wonder who he is and what he wants.

Valentin may introduce himself and nudge Sasha in Nina’s direction. He’ll just want Sasha to understand what’s at stake for Nina. She’s wished for motherhood for what feels like forever and this could be her final shot at an impossible dream. Valentin may ask if Sasha can really deny Nina that. He may hope a little guilt trip will work out in Nina’s favor.

However, Valentin’s taking a risk here. He could drive Sasha further away if he’s not careful. In the meantime, Peter (Wes Ramsey) will tell Drew (Billy Miller) his honest opinion. He’ll be speaking from experience when he indicates that looking back can’t bring peace. Drew has to make a choice on the flash drive, so hearing Peter’s advice could play a role in what he decides.

Later, Sonny (Maurice Benard) will have a discussion with Drew. His perspective will shape Drew’s decision as well, so stay tuned to see what Drew does next. Of course, Spencer (Nicholas Bechtel) will also make an appearance at the Corinthos compound. He’ll plan to make things right, so Sonny will have some questions. Spencer’s loved ones are definitely curious about the trouble he intends to stir up.

Other General Hospital spoilers say Oscar’s (Garren Stitt) scheme will move forward. He’ll rely on Cameron (William Lipton) for one last thing, but Cam won’t be keen on providing more help. They’re deceiving Josslyn (Eden McCoy) in hopes of turning her against Oscar. He believes it’s the only way to ease the pain of his inevitable death, but Cameron just doesn’t like this.

Nevertheless, Cameron will probably cave in. He’ll feel bad about Oscar’s fate, so he should carry out his frenemy’s wishes – for now anyway. At The Invader office, Laura (Genie Francis) will pop in and check out where Lulu (Emme Rylan) works. She’ll suggest that they have a lot to catch up on and she’s absolutely right.

Lulu’s issues with Dante (Dominic Zamprogna) are getting worse, so that should come up in this chat. Laura will want to gripe about “Kevin” (Jon Lindstrom), too. She can tell he’s avoiding a reunion in the bedroom, so she’ll try to pinpoint the problem. Laura certainly won’t guess that the twin swap’s to blame!

Across town, Valerie (Brytni Sarpy) will speak up on behalf of someone. She’ll do her best to assist a friend, so Kristina (Lexi Ainsworth) may get a helping hand. We’ll give you updates as other GH news comes in. Stick with the ABC soap and don’t forget to check CDL often for the latest General Hospital spoilers, updates and news.