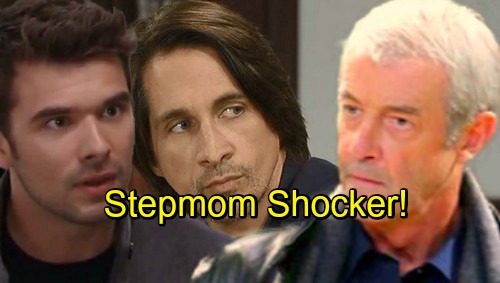 General Hospital (GH) spoilers tease that more details will be revealed about Finn (Michael Easton) and Gregory’s (James Read) complicated past. GH recently offered some huge clues about where this story’s headed. It seems Finn’s stepmother is the real source of trouble. Gregory appears to be out of the loop on what really went down, so this may involve a secret between Finn and his stepmom.

After Finn gave Gregory his diagnosis, he promised to pass along all his medical info to another skilled doctor in Berkley. Finn feels like he’s fulfilled his duties here. He got to the bottom of Gregory’s crisis and now he’s ready to move on with his life. However, Gregory still wants to repair the damage with Finn. He can’t understand why his wife still draws such a hateful response from Finn.

Now’s a good time to talk about those clues we mentioned. During Finn’s conversation with Gregory, he had some suggestions for his dad’s recovery. Finn went down a list of things like massage therapy, Chinese herbal tea and exercise. Gregory pointed out that his wife supports all that. He acted like Finn and his wife would be two peas in a pod, so maybe they were once upon a time.

When this storyline was first introduced, CDL speculated that Finn may have been involved with his stepmother. Perhaps she was Finn’s girlfriend before she was Gregory’s wife. It’s easy to see why Finn would’ve held a grudge over that.

It could also provide an explanation for Gregory’s quick marriage following the death of Finn’s mom. If this woman got pregnant by Finn and then fell for his father, she would’ve wanted to pass the kid off as Gregory’s. Maybe part of Finn has always suspected that Chase could be his son instead of his brother. He probably doesn’t have confirmation on that, but he’d surely wonder.

If all this adds up, General Hospital spoilers say a true family blowup could be brewing. Chase and Gregory could be blindsided by some huge news. Finn’s stepmom might make a confession if she somehow thinks it’ll help Gregory understand. She’s obviously desperate for them to connect. That’s why she sent Gregory to Finn instead of some other doctor.

A revelation like this could really turn Chase’s world upside down. It’d definitely bring chaos for Finn and Gregory, too. General Hospital fans won’t want to miss the twists in this shocking storyline. We’ll give you updates as other GH info comes in. Stay tuned to the ABC soap and don’t forget to check CDL often for the latest General Hospital spoilers, updates and news.