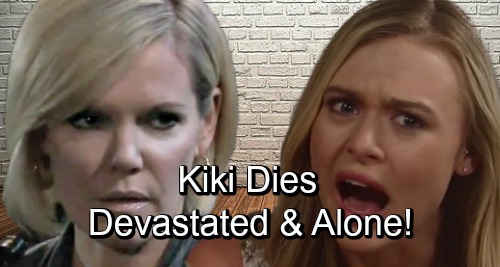 General Hospital (GH) spoilers tease that Ava’s (Maura West) plan is slowly coming together. She kicked off her revenge mission by forcing Griffin’s (Matt Cohen) confession on the stand. That led to some embarrassment for Kiki (Hayley Erin) and put her case in jeopardy, but there were no real consequences in the end. Kiki still won the battle, so Ava’s looking for a way to hurt her daughter.

Griffin’s been paying the price since Ava blabbed about the illegal DNA test. He was suspended from GH, so that was certainly a point for his vindictive ex. However, Kiki’s betrayal still deserves a good dose of vengeance – at least according to Ava. General Hospital spoilers say Ava could have some help as she works to make Kiki suffer.

During a chat with Julian (William deVry), Ava acknowledged the fact that she’s the town pariah. Meanwhile, Kiki’s got plenty of friends and is held in high regard. Ava would love for Kiki to feel ostracized for once. She wants Kiki to see what it’s like when the world turns against you. Can Ava make that happen? She certainly intends to try!

On October 16, Ava will throw back some drinks with a new pal. General Hospital fans know Ava opened up to Ryan (Jon Lindstrom) during a session. Perhaps their next conversation will occur in a more casual setting. Ryan may think it’ll be a good way to lower Ava’s guard even more. He clearly hopes to grow closer to her and prey on her dark side.

Ava might mention her latest desire to Ryan. She could explain that she wants Kiki to feel loathed and not just by her. “Kevin” can’t support that without raising red flags, but he could insist that it’s an acceptable craving. Ryan may note that he completely understands where Ava’s coming from. He could even badmouth Kiki slightly and suggest she’s stuck up for acting morally superior.

That may be enough to greenlight Ava’s scheme. She might decide that if “Kevin” agrees with her, then surely Kiki deserves this. Unfortunately, Ava’s plot could spell trouble. Growing closer to Ryan is an issue since he’s a vicious sociopath.

General Hospital spoilers hint that a murder may be brewing, so it could be Kiki. Hayley Erin’s set to exit the show before long, which makes Kiki a likely death candidate. If Ava’s plan works beforehand, that could make Kiki’s demise even sadder. Maybe Ava’s setup will somehow turn Kiki’s loved ones against her. If Ryan kills Kiki at that point, it’d mean Kiki would die devastated and alone.

Of course, the truth could come out later and leave everyone with regrets – especially Ava. General Hospital spoilers say the mother-daughter drama’s about to rev up, so don’t miss what’s in store. We’ll give you updates as other GH news comes in. Stay tuned to the ABC soap and don’t forget to check CDL often for the latest General Hospital spoilers, updates and news.