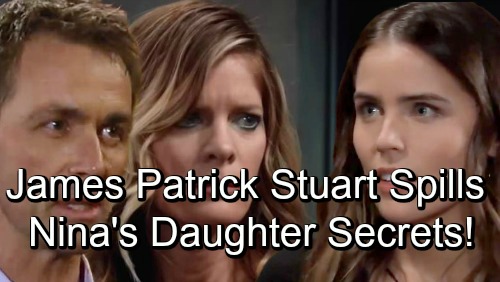 General Hospital (GH) spoilers tease that the rest of Nina’s (Michelle Stafford) daughter storyline will bring heartbreak, shockers and hopefully some hope. In an interview with Soap Opera Digest, James Patrick Stuart (Valentin) discussed the difficult road ahead. He admitted that Nina had some devastating curveballs in store for her.

GH fans know Nina’s been nervous about the voicemail she left Sasha (Sofia Mattsson). She feared she blew it by rambling about being Sasha’s mother, but Valentin offered reassurance. Now that the call has finally come in, Valentin’s counting on everything to work out. Sadly, the meeting Sasha sets up will only bring pain. On the bright side, we’ll see some fantastic work from Stafford.

“Michelle is freaking awesome,” Stuart gushed. “When they shot the scenes of her talking to her daughter for the first time, everyone stopped to look at the monitors.” Stuart promised General Hospital viewers that Stafford’s performance would be “gripping and spellbinding.” It sounds like everyone will want to tune in for this pivotal moment.

Stuart also talked about Valentin’s reaction to the news of this meeting. As you might expect, he’ll be ecstatic. Stuart said that “for Valentin, it’s like ‘Mission accomplished! Sasha is in Nina’s life!’” Unfortunately, Valentin will soon realize things have gone horribly wrong. He’ll find Nina in tears after Sasha announces that she wants nothing to do with her.

Valentin will hate seeing Nina so broken and vulnerable. Stuart noted that despite their divorce, Valentin will let Nina know he’s there for her. Since she’ll be so distressed, Nina just might accept a little of her ex’s comfort. She’ll be desperate for some love to hold on to.

Of course, many GH watchers still have questions about Sasha. Is she really Nina’s biological child? Are those DNA test results legit? Stuart addressed the possibility that Valentin cooked up this whole thing for Nina. He doesn’t necessarily think so, but he can’t deny the option!

“It would be nice to believe that it was too sacred a ground [for Valentin to manipulate],” Stuart said. “But even Michelle and I look at each other like, ‘This son of a bitch is never gonna learn, is he?’” Could that be a hint about some funny business? It’s doubtful Valentin had a hand in rigging these DNA tests. He’s seemingly been too concerned about hiding the truth until he knew for sure.

However, Valentin could still manipulate the situation. He might bribe Sasha into bonding with Nina or even threaten her if need be. No one hurts his love and gets away with it. General Hospital spoilers say desperation could drive both Nina and Valentin to make some mistakes. Since Sasha may not even be the right daughter, this story could turn into a soapy mess!

Some terrific twists are still to come, so don’t miss Nina’s search for the truth. We’ll give you updates as other GH details emerge. Stay tuned to the ABC soap and don’t forget to check CDL often for the latest General Hospital spoilers, updates and news.