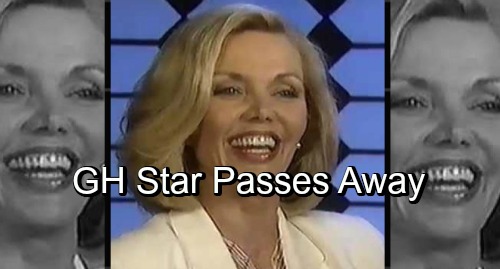 General Hospital spoilers are sad to report that GH star Deanna Lund is dead at 81. New reports say that the beloved former Port Charles actress passed away in her home in Century City, California after she lost her battle with pancreatic cancer. She was diagnosed with the disease back in September 2017. Deanna was best known for her role as Peggy Lowell on General Hospital.

Born in Oakland Park, Illinois, Deanna was raised near Daytona Beach and graduated from Rollins College in Winter Park, Florida. Her first major role in front of the cameras was as a weather girl at a news station in Miami.

Deanna’s fist marriage was to Wilber Owen Upson. The couple shared two children, Randy and Kim. She met her second husband, actor Don Matheson on the set of the hit 1970’s television show, Land of the Giants. The couple was married in 1970 but divorced in 1980, shortly after Land of the Giants was canceled.

Deanna landed her role as Peggy Lowell on General Hospital in 1976. In addition to her role on the hit ABC show, she also played Virginia Keyser on One Life to Live from 1980 until 1981. Because of her role on Land of the Giants, she was forced to turn down the role of Terry in Roman Polanski’s massive hit, Rosemary’s Baby.

The role eventually went to actress Mia Farrow, who also happened to be Deanna’s friend at the time. In addition to her work on daytime television, Deanna also starred in the movie Tony Rome with Frank Sinatra, Batman with Adam West and the Elvis Presley films Paradise, Hawaiian Style and Spinout.

During her later years, Deanna conducted many acting classes in Hollywood and wrote a novella called Valerie in Giantland. She said that the book was based on her role in Land of the Giants, as it was set ten years after the series ended.

Deanna is survived by daughters Michele and Kimberly, her son Randy, her grandchildren Phyllis, Elizabeth, Shawn, Tyler, Ryan, Jack and Jolene, and great-grandchildren Ellie, Charlotte and Quinn. In the meantime, don’t forget to check back with CDL for all the latest news, updates and spoilers on General Hospital and all of your favorite daytime television shows right here.