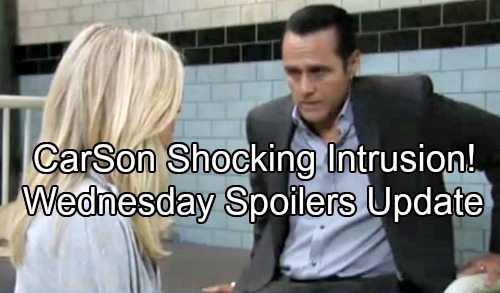 General Hospital (GH) spoilers update for Wednesday, June 27, tease that Michael (Chad Duell) will face an unexpected encounter. When he spots Francesca (Celesta DeAstis) at GH, she’ll seem concerned about something. Francesca will think she needs to explain the situation to Michael, so he should be in for quite a shock.

This could be about Dr. Bensch’s (James DePaiva) sexual harassment or perhaps another round of Nelle (Chloe Lanier) drama. Either way, Michael should appreciate Francesca’s updates. He’ll hope he can do his part to handle the problem.

Over with Chase (Josh Swickard), he’ll rehash his history with Nelle (Chloe Lanier). General Hospital spoilers say Nelle will look a bit anxious, but she’ll probably regain her composure soon. Nelle’s not the kind of gal who backs down from a fight. She’ll likely regain her typical scheming spirit before long.

Chase will snarl about Nelle avoiding punishment for her crimes. He’ll hint that she’s going to get what she has coming one day. However, Chase will probably mellow eventually. He needs to prey on Nelle’s weak spot and make her think he’s the same sucker he was back in Florida. If Nelle believes she has the upper hand, she may spill secrets and fall right into Chase’s trap.

Back at GH, a phone call will come in for Kiki (Haley Erin). It appears she’ll rush over to Charlie’s Pub for a chat with Alexis (Nancy Lee Grahn). While Alexis waits, she’ll drop off a special delivery. Julian (William deVry) will be served with a subpoena, but he should get some words of gratitude as well. Their therapy session wasn’t exactly fun, but it meant a lot that Julian was willing to come.

Unfortunately, Dr. Bensch will also pop in for some pub grub. Kiki will seethe at the sight of him and hope Alexis is prepared for a court battle. Too bad Alexis may take herself off the case! General Hospital spoilers state that Kiki will have more of a mess to deal with soon, so stay tuned.

Meanwhile, Liz (Rebecca Herbst) will reassure a frustrated Franco (Roger Howarth). He’ll feel powerless when it comes to saving Kiki from pain, but it’s beyond his control. Liz will believe they’re still helping her out. Kiki knows she’s got plenty of people on her side and that matters.

Ava (Maura West) and Griffin (Matt Cohen) are certainly rooting for Kiki to win her case. Naturally, Ava’s willing to take justice into her own hands if she has to. She’ll talk about how far she’d be willing to go, so Griffin will battle some fears. He won’t want Ava heading down a path of destruction again.

At Ferncliff, Sonny (Maurice Benard) will try to lift Carly’s (Laura Wright) spirits. His visit alone is a nice start. Nevertheless, GH spoilers say Carly will fret over her current nightmare. Mary Pat’s (Patricia Bethune) a total monster, so Carly just wants her freedom. Sonny will promise that he’s going to get it for her. Carly just has to be patient and trust that revenge on Nelle will be satisfying.

General Hospital spoilers say this “CarSon” reunion will ultimately be disrupted. The unknown man in the other room might decide to have another meltdown. Carly’s bound to do more snooping, but will it land her in hot water? We’ll keep you posted as other GH news comes in. Stay tuned to the ABC soap and don’t forget to check CDL often for the latest General Hospital spoilers, updates and news.