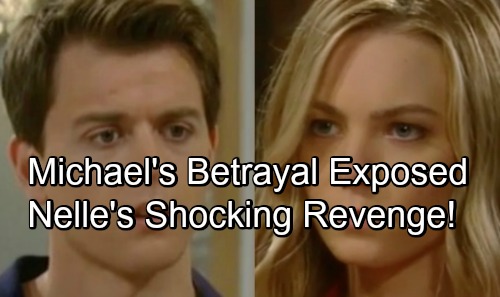 General Hospital (GH) spoilers tease that the walls will soon close in on Nelle (Chloe Lanier). Michael (Chad Duell) is pulling her deeper into his own web of deception. He’s hoping she’ll never see his takedown mission coming.

The situation with Chase (Josh Swickard) could actually work to Michael’s advantage. Nelle may be too worried about the detective’s threat to notice what Michael’s plotting. Plus, Nelle’s scrambling thanks to Chase’s unexpected reappearance. She’s sending herself gifts to make Chase look like a stalker and it’s bound to backfire.

Michael already caught Nelle in the T-shirt lie and more lies will follow. He’ll have plenty of opportunities to trap Nelle in her deception. Josslyn (Eden McCoy) also got her hands on Morgan’s (Bryan Craig) cologne, so she should put the clues together eventually. 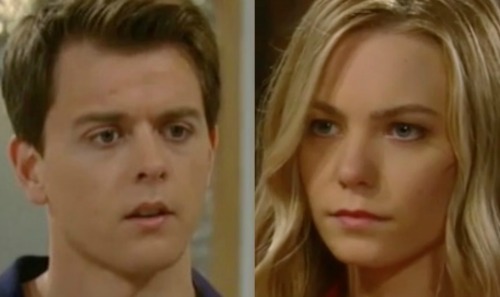 General Hospital spoilers say Jason (Steve Burton) and Spinelli (Bradford Anderson) will catch a lucky break, too. It looks like they’ll find some potentially incriminating evidence. Sonny’s (Maurice Benard) desperate for vengeance as well, so there are several enemies scheming against Nelle. She seems poised for a huge fall, but can you ever keep a GH villainess down for long?

Nelle’s definitely going to suffer somewhat, but the aftermath may not be as brutal as Carly (Laura Wright) and her cronies might’ve hoped. After all, Nelle has been called out on her schemes before. She never avoids consequences entirely, but she always finds a way to minimize the damage.

That may also be the case this time around. Nelle’s pregnant, so that should be a factor in what’s ahead. Michael and the others are really kicking their plots in gear right now. Will one of them go too far? Will Nelle once again face danger thanks to the Corinthos family and the people closest to them? 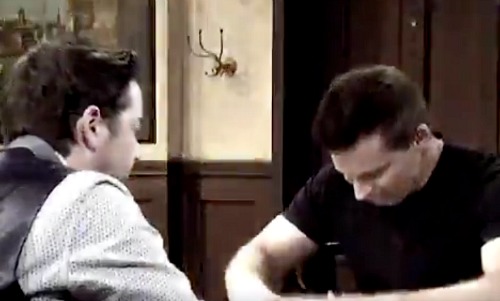 It’s possible a confrontation will lead to a second tumble or other traumatic injuries. If that leads to risky labor and the baby survives, Nelle could easily score full custody. Even if Michael proves Nelle’s pattern of lying, he can’t produce the baby blanket. Ava (Maura West) is guarding that secret. There’s nothing to back up Carly’s claims, so she may have to hang in there and just show that she’s sane.

As for Nelle, she’d have two serious incidents to use against the Corinthos’ clan. After finding out about Michael’s betrayal, she could stick it to him with a cutthroat custody battle. Nelle might try to cut him out of the child’s life entirely.

Of course, many General Hospital fans aren’t so sure this is even Michael’s kid! Time will tell, but things are certainly about to get interesting. We’ll give you updates as other GH news comes in. Stay tuned to the ABC soap and don’t forget to check CDL often for the latest General Hospital spoilers, updates and news.