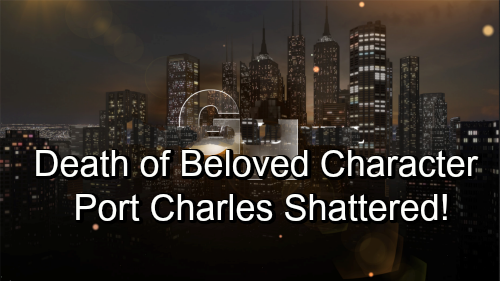 General Hospital (GH) spoilers tease that deadly danger could be looming. Of course, GH fans suspected that already thanks to evil Ryan (Jon Lindstrom). Once he swapped places with Kevin (Jon Lindstrom), the countdown was on! It’s just a matter of time until Ryan puts a fatal scheme in action.

Ava (Maura West) suddenly landed in Ryan’s orbit when she stopped by to see “Kevin.” She was eager to discuss how much she wanted revenge on Griffin (Matt Cohen) and Kiki (Hayley Erin). Instead of lecturing Ava for her lack of morals, “Kevin” praised her for her candor. He’ll continue to fuel the wrong fire inside Ava, so that’ll play a role in what comes next.

Kiki and Griffin also seem poised for happiness. That’s a big clue that trouble’s headed their way. Even if Ava lets go of her plans for vengeance, Ryan certainly won’t. He could easily go after one or both of them in an effort to settle the score. Ryan would see death as an appropriate punishment for betrayal.

General Hospital offered another hint by dragging up the drama of Morgan’s (Bryan Craig) demise. As usual, it was an argument topic for Carly (Laura Wright) and Ava. GH fans will recall that Ava switched Morgan’s pills for placebos. His downward spiral led to his death, so Carly’s always going to hold a grudge.

Ava never meant for Morgan to die, but that didn’t stop it from happening. She won’t mean for Kiki to die either, but that could easily be the next death to rock Port Charles. All the signs point to it, especially since Hayley Erin is out as Kiki. With her exit in the works, a lethal outcome seems likely.

Perhaps the biggest piece of evidence is a new Soap Opera Digest blind item. This tidbit could be about any of the four main daytime dramas, but it fits best with GH. The blind item reveals that one soap plans to kill off a well-liked character.

Days of Our Lives tapes nearly six months in advance, so it’d be weird to hear about their plans right now. We’d be more likely to hear about what they’ve already shot. As for The Bold and the Beautiful, love triangles and custody battles are more their style. They don’t kill characters off very often.

The Young and the Restless is an option, but they already had a major death not too long ago. It’s doubtful they’d kill another character off so soon. That leaves General Hospital as our soap with deadly plans. It makes sense when you consider wicked Ryan’s on the loose and out for blood.

Since GH is probably the soap that’ll be doing the killing, Kiki is the most logical option. She’s a character that most people seem fond of. Plus, we’ve got all those clues we mentioned. Things just aren’t looking good for poor Kiki!

Do you think Kiki will bite the dust? Will you be bummed if GH kills her off? We’ll give you updates as other news comes in. Stay tuned to the ABC soap and don’t forget to check CDL often for the latest General Hospital spoilers, updates and news.