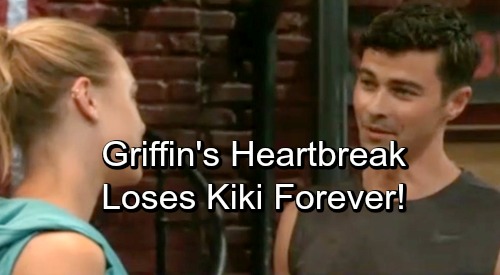 General Hospital (GH) spoilers tease that Griffin (Matt Cohen) will have some hope for the future. There’s a good chance he’ll be reinstated at GH eventually, but his positive attitude will involve his love life for now. Kiki (Hayley Erin) recently made made her desires known, so Griffin’s ready to see what’s in store for them as a couple.

On October 11, General Hospital spoilers say Griffin will have something to look forward to. He’ll believe the road ahead is paved with possibilities. Kiki and Griffin may have some special date in mind. They’ll be eager to move out of the friend zone and let their love grow.

Unfortunately, Griffin’s setting himself up for more heartache. He was truly in love with Ava (Maura West) before the one-night stand drama exploded. At least he thought he was! Thanks to Ava’s vengeful reaction, Griffin’s starting to think he never should’ve been with her in the first place. He thought Ava was capable of change, but it’s clear that she isn’t.

General Hospital spoilers say Ava will prove that with the next phase of her plan. She’s not done bringing misery upon her victims. As Griffin and Kiki grow closer, it’s only going to make Ava more furious. She’ll want to crush them like bugs and make them sorry they dared to betray her.

Next week, Kiki will make matters worse by provoking Ava. She’ll rip into her mother again, which can only spell trouble. It’s not the best idea to cross Ava right now. She’s suddenly got evil Ryan (Jon Lindstrom) in her corner! Of course, this should all build to Kiki’s devastating exit. It appears Hayley Erin’s out and there are no hints a recast at this point.

That means Griffin’s going to lose this love interest, too. Ava will likely play a role in driving Kiki and Griffin apart. With “Kevin’s” help, Ava may create a situation where there’s just too much pain to overcome. Whether Kiki’s forced out of town or killed off, Griffin certainly won’t get the outcome he was hoping for.

What’ll Griffin do after another round of sorrow? Will he give up on love for a while or let another lucky lady mend his broken heart? General Hospital fans will be anxious to see what’s in store. We’ll give you updates as other GH news comes in. Stay tuned to the ABC soap and don’t forget to check CDL often for the latest General Hospital spoilers, updates and news