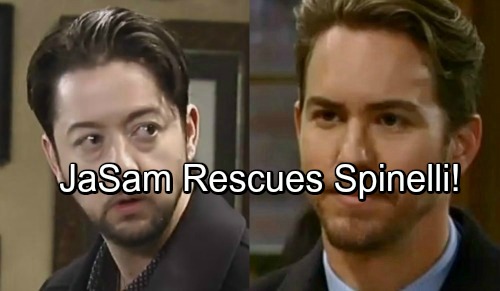 General Hospital (GH) spoilers tease that Jason (Steve Burton) will get a huge shock in Switzerland. People say it’s a small world, but that’s especially true on soaps! Coincidences are certainly the norm on GH, but they still tend to catch characters off guard. That’ll be the case when Jason spots Sam (Kelly Monaco) on his trip. He never expected to run into her on this trip, but he’ll be happy he did.

Sam will be just as surprised to see Jason, but they won’t have much time for pleasantries. It won’t be long until some stunning news comes in. General Hospital spoilers say Spinelli (Bradford Anderson) will find himself on the wrong side of the law. He hoped to get to impersonate Heinrik and get to Faison’s (Anders Hove) safe deposit box, but it looks like that plan won’t pan out.

Spinelli will land behind bars, so he’ll naturally call on Jason for assistance. General Hospital spoilers say Sam will want to pitch in, too. Spinelli’s working on this mission to benefit Jason and Drew (Billy Miller), so Sam will obviously be appreciative. She’ll also hate that Spin’s act of deceitful kindness blew up in his face!

Furthermore, Sam won’t want Jason to deal with the drama alone. Part of her will simply want to spend time with him. Fate will throw them together, so that’s something that will undoubtedly be on Sam’s mind throughout all this. She may feel like this is a sign about the choice she should be making.

However, Sam can ponder her love life later. Spinelli will be desperate to get out of the slammer! General Hospital spoilers say Sam and Jason will travel to where Spin’s being held. They’ll do whatever they can to score his freedom. Sam might try some sweet-talking while Jason gets sneaky. They may break Spinelli out if they have to.

Whatever the case, Jason and Sam will definitely make a good team. Working together will bring them closer, so GH fans can expect a warm reunion soon. We’ll give you updates as other details emerge. Stay tuned to the ABC soap and don’t forget to check CDL often for the latest General Hospital spoilers, updates and news.