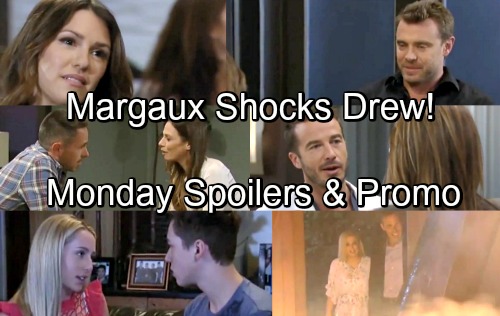 General Hospital (GH) spoilers for Monday, July 23, tease that Josslyn (Eden McCoy) may be ready for a big step. During a conversation with Oscar (Garren Stitt), Joss will suggest that they should take this upstairs. Oscar will look a little uncomfortable, so he might shut down the idea. If Josslyn has sex in mind, Oscar may not be prepared to take that leap just yet.

GH fans can expect some conflict between Oscar and Josslyn pretty soon. You can bet Joss will lean on Cameron (Cade McWatt) as this storyline moves forward. In the meantime, Margaux (Elizabeth Hendrickson) will sit down for a chat with Drew (Billy Miller). She’ll meet up with him at the Metro Court and insist that they have some business to discuss.

Drew will be a bit puzzled by all this. He’ll wonder what business the DA would have with Aurora Media. Margaux will flash an intriguing smile, so she must have something up her sleeve. Elsewhere, Kim (Tamara Braun) will take Julian (William deVry) by the hand and drop a truth bomb. She’ll want to be honest about where things stand between them.

Kim will assure Julian that she enjoys spending time together, but she can’t promise she’s spending her life with him. It’s too soon for Kim to commit to anything major. Nevertheless, Kim will hope “Charlie” can be patient and just come along for the ride. She won’t want to give up on their intense spark.

At GH, Lucas (Ryan Carnes) will worry about the adoption. He’ll corner Alexis (Nancy Lee Grahn) and ask if there’s a way to make sure they’re legally protected. They’ve been over dozens of times, so Alexis may point that out. It seems Lucas and Brad (Parry Shen) have done everything they can. Once the baby’s born, the birth mom will have 30 days to change her mind. There’s just no getting around that.

Valentin (James Patrick Stuart) managed to rescue Nina (Michelle Stafford), but Finn’s taking the lead on Anna’s (Finola Hughes) son. He knows Peter’s death would devastate her, so he’ll do everything he can to prevent it. Thankfully, Finn will pull Peter out before the stables collapse. Peter will need to be hospitalized after his terrible ordeal, but he’s going to be just fine.