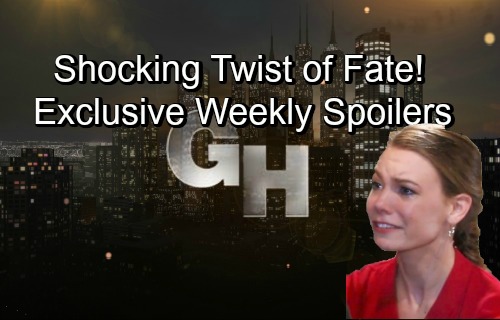 General Hospital (GH) spoilers for the week of July 23-27 tease that fears will take control in Port Charles. For starters, Finn (Michael Easton) will battle major concerns about Anna (Finola Hughes). After Peter’s (Wes Ramsey) dramatic rescue, Finn will want to let Anna know that her son’s alive and recovering. He’ll have a bad feeling when he still can’t get in touch with her.

A quick call to Robin (Kimberly McCullough) could tell Finn that something’s seriously wrong. Robert (Tristan Rogers) will also make his way back to PC, so let’s hope he can help Finn crack this case. In the meantime, Nina (Michelle Stafford) will need some legal guidance. She’ll turn to Alexis (Nancy Lee Grahn) for help with the jam she’s stuck in.

Nina may face charges for conspiring with Liesl (Kathleen Gati). That’d certainly be an urgent reason to seek assistance. General Hospital spoilers say Nina will accept the advice she’s given, but she may not need it after all. Once Nina catches a lucky break, she’ll breathe a huge sigh of relief. It seems likely that Valentin (James Patrick Stuart) will be behind Nina’s good fortune.

Sadly, it looks like Valentin’s reunion plan will fail. He may try to make amends again after the fire fiasco, but Nina still doesn’t appear to be ready. Her continued rejection could bring a tough blow, but Valentin will hold out hope for their future together.

Other General Hospital spoilers say Nelle (Chloe Lanier) will count on Chase (Josh Swickard). She’ll insist that killing Michael (Chad Duell) would solve all their problems, but she’s walking right into a trap. Later, Nelle will freak as the plot goes awry. She’ll change her game plan, which could spell disaster for frantic Chase and Michael.

Elsewhere, Drew (Billy Miller) will be surprised with a present. Perhaps Margaux (Elizabeth Hendrickson) will offer a new shirt or a dry-cleaning gift card. She felt horrible about dousing Drew in mustard, so it makes sense that the gift would tie back in with that incident.

Over with Oscar (Garren Stitt), he’ll feel like he’s being ignored. Josslyn (Eden McCoy) was a bit cold toward him at the wedding and that trend will continue. As Oscar wonders what the problem is, Joss will open up to Nelle. Will Josslyn feel like they’re losing their spark? She’ll undoubtedly inch in Cameron’s (Cade McWatt) direction soon, so stay tuned.

Finally, Sonny (Maurice Benard) and Kevin (Jon Lindstrom) will have a fierce faceoff. GH spoilers say the issue will involve Carly’s (Laura Wright) harsh treatment. While Kevin’s off visiting Laura (Genie Francis), Carly will continue to face a total nightmare at Ferncliff. Sonny should be angry with Kevin for bailing on Carly and leaving her in cruel hands.

GH viewers won’t want to miss this week’s big bombshells. We’ll give you updates as other news comes in. Stick with the ABC soap and don’t forget to check CDL often for the latest General Hospital spoilers, updates and news.