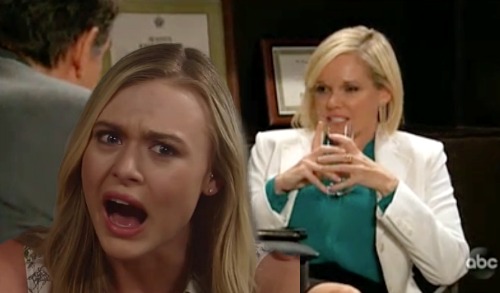 General Hospital (GH) spoilers reveal that Ava (Maura West) may have made a colossal mistake. She’s been wrestling with vengeful desires lately, so she decided to pay Kevin (Jon Lindstrom) a visit. Of course, GH fans know Ava actually spoke to Ryan (Jon Lindstrom). Their chat may have sealed the fate of another character, so let’s unpack what they discussed.

Ava opened up about how much Griffin (Matt Cohen) and Kiki (Hayley Erin) hurt her. She admitted that she truly tried to be a better person, but it didn’t do any good. Ava still got burned and now she’s craving revenge. She was expecting “Kevin” to lecture her or at least talk her down, but he had no interest in that.

Instead, “Kevin” praised Ava for being so honest about her wicked wishes. He argued that he wasn’t there to judge; he was just there to let Ava hear herself. That’s pretty much the worst possible advice he could give Ava. She hears herself loud and clear already! The last thing Ava should be doing is listening to that nasty little voice.

Nevertheless, Ava’s eager to learn more from wise “Kevin.” General Hospital spoilers say she’ll set up another appointment soon enough. Ryan may convince Ava to meet up outside his office, too. On October 16, Ava will find someone new to drink with. Perhaps Ryan will offer to buy her a martini and let her unload additional frustration.

We should mention that Ryan recently mistook Ava for Felicia (Kristina Wagner). He noted that they looked a lot alike from behind. Now that Kevin sees Ava’s claws coming out, he’s quite drawn to her. It sounds like Kevin could be trading his Felicia obsession for an Ava infatuation. He could at least add Ava to the list!

Naturally, this could stir a ton of drama in Port Charles. It’s easy to imagine “Kevin” cheating on Laura (Genie Francis). He wouldn’t really be betraying her since he’s not her husband, but she’d have no idea. By the time the real Kevin goes free, his marriage could be destroyed.

However, the bigger issue is Ava and her mission for vengeance. Ava has a dark side, but she’s not pure evil. She adores Avery (Ava and Grace Scarola) and even Kiki deep down. We’ve definitely seen some glimmers of good in this mom.

Ryan, on the other hand, is a true sociopath. He’s a coldblooded monster, so he may think he can bring out the worst in Ava. Even if he can’t, he may try to make her happy in his own twisted way. Since Hayley Erin is headed for the exit, will Kiki be killed off? Ryan could decide to murder Kiki and get the ultimate payback for unsuspecting Ava. She’d be horrified when she found out what he’d done!

If General Hospital takes this route, it’d bring some heartbreaking scenes. Do you think GH is gearing up for Kiki’s death? We’ll give you updates as other news comes in. Stay tuned to the ABC soap and don’t forget to check CDL often for the latest General Hospital spoilers, updates and news.