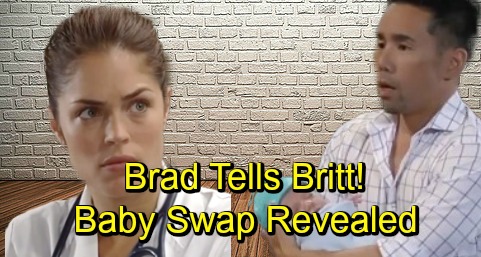 General Hospital (GH) spoilers tease that it’s almost time for Britt’s (Kelly Thiebaud) big comeback. Thiebaud herself broke the news and fans have been anxiously awaiting her return ever since. It turns out the big day’s coming up on new GH episodes next week, October 29-November 2.

On Twitter, Thiebaud made another announcement about what to expect. She tweeted, “My first episode airs Monday October 29th!” It looks like Thiebaud will be around for a handful of episodes, so it should be interesting to see who Britt interacts with. We know at least one of the GH characters who’ll pay her a visit.

On November 7, General Hospital spoilers say Brad (Parry Shen) will reach out to his old pal. He’s got a major secret that’s really weighing on him, so he’ll decide to spill it to Britt. Will Brad reveal the whole baby swap story or just part of it? Regardless, it’s clear that he’s about to share something huge!

Britt is obviously no stranger to scheming, so she won’t judge Brad for his actions. She cares about him, so she probably won’t pose a real threat either. Perhaps there’ll even be a way for Britt to help Brad out. She can’t do a ton from behind bars, but she could keep tabs on Nelle (Chloe Lanier) if they’re both at Pentonville.

Of course, Britt’s been stuck in prison for far too long. Will she remain there at the end of her upcoming stint? It’d be fun if GH went for an escape storyline. Maybe Britt could meet up with Dr. Liesl Obrecht (Kathleen Gati). The mother-daughter duo could go on the run together – at least for a while.

Then again, there might be some legal loophole that’ll get Britt off the hook. With good behavior and a lawyer’s sneaky maneuvering, perhaps Britt could score her freedom legally. It’d open the door for Britt to pop up more often, which many GH viewers would love!

Whatever the case, General Hospital has some fun scenes coming up. “The Britch” is back and she’s going to get caught in some fantastic drama! We’ll give you updates as other GH details emerge. Stay tuned to the ABC soap and don’t forget to check CDL often for the latest General Hospital spoilers, updates and news.