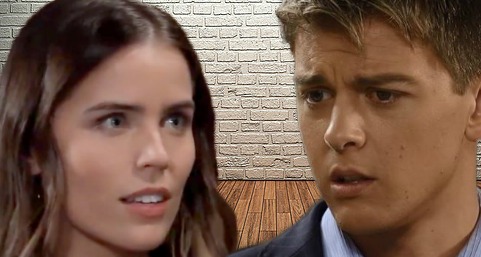 General Hospital (GH) spoilers tease that Michael (Chad Duell) will try to find a way past his sorrow. It’s been a while since Jonah’s “death,” but Michael’s heart just isn’t healing properly. Maybe he’s not doing enough to work though his grief.

Then again, a small part of Michael may feel Jonah’s presence in Port Charles. That could be why he’s feeling so stuck and can’t let go. Regardless, GH fans can expect more pain for Michael. He’ll meet up with Chase (Josh Swickard) next week, so they’ll do some bonding. As Nelle’s victims, they understand the kind of damage she can do.

Chase and Michael will discuss that damage, but it’s probably a bad idea. It looks like it’ll only bring Michael down, which just isn’t what he needs right now. Of course, Halloween could make matters worse. There’ll be plenty of kids in town dressing up and trick-or-treating.

It’s easy to imagine Michael running into Brad (Parry Shen) or Lucas (Ryan Carnes) with “Wiley.” Can’t you just envision the little fella in a pumpkin costume? Michael will inevitably think about all the fun he’s going to miss out on. He’ll believe he’ll never watch his child grow up and engage in all the typical holiday fun.

General Hospital spoilers hint that Michael will toss back some drinks and try to ease his pain. However, that’ll just be a temporary solution. It may bring Michael some brief comfort, but he needs a long-term solution. Baby swap stories can take many months to play out. There’s no predicting when Michael will finally learn the shocker, so GH needs to let him cope somehow.

Could Michael find love and fill his heart that way? General Hospital has struggled to find a successful pairing for Michael, but a new option just hit town. Sasha (Sofia Mattsson) recently arrived, so the show should put her in a romance eventually. She was clearly attracted to Griffin, so it’s not a stretch to think she’d be attracted to PC’s other vanilla option.

Michael’s not the most exciting guy in the world, which is why he needs someone like Sasha. She seems like the kind of gal who could really sizzle on screen. Sasha could carry the pairing and possibly make this work. It’d at least be worth a shot.

Do you think GH should give Michael and Sasha a try? Would you rather see Sasha with someone else instead? We’ll give you updates as other news comes in. Stay tuned to the ABC soap and don’t forget to check CDL often for the latest General Hospital spoilers, updates and news.