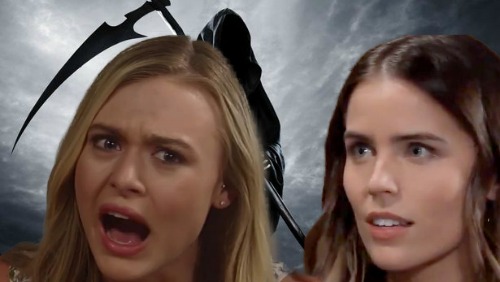 General Hospital (GH) spoilers tease that Ava (Maura West) will work out the details of her grand plan. She just noticed Sasha (Sofia Mattsson) checking Griffin (Matt Cohen) out, so she intends to work that angle. It’s worth mentioning that Griffin had a little sparkle in his eye, too. He’s with Kiki (Hayley Erin), but that doesn’t mean he didn’t enjoy the nearby view!

It’ll be easy for Ava to prey on these three and stir up some trouble. However, there’s a bigger concern here and it’s not the outcome of a love triangle. Griffin honestly isn’t that much of a prize. He’s kind and handsome, but he’s also a bit boring. Plus, Griffin clearly has issues when it comes to temptation.

Even the looming sister conflict isn’t the real problem in all this. Ava’s link to Ryan (Jon Lindstrom) is the reason to worry! By associating with this dangerous sociopath, Ava’s putting Kiki and Griffin at risk. Since she’s going to drag Sasha into it, that could put her life on the line, too.

It’s doubtful General Hospital would bring Sasha on just to kill her off. Kiki seems like a far more likely death candidate. Nevertheless, Sasha could certainly find herself in harm’s way. After meeting Kiki, Sasha invited her new sis to go out for a night on the town. She wanted to hit up somewhere more fun and do some dancing.

Once Sasha realized Kiki was on a date with Griffin, she politely gave Kiki an out. Still, it’s clear that Sasha likes Kiki and wants to bond. Kiki wants to do the same, so that’ll put Sasha in her sister’s orbit. It could also put Sasha in Ryan’s perilous path.

We have to remember that Ryan could target people for a variety of reasons. He’s currently infatuated with Ava, so that’s his motive for going after Kiki. Sasha, on the other hand, could accidentally learn too much. She might spot overhear Ryan talking to himself about his evil intentions – as soap characters tend to do.

If Kiki somehow dies defending her sister, that’d be a heroic final act. Of course, Sasha could also end up fighting to survive at GH. Ryan might still do some damage. That’d bring some heartbreaking scenes for poor Nina (Michelle Stafford)! On the bright side, the ordeal could strengthen their mother-daughter connection.